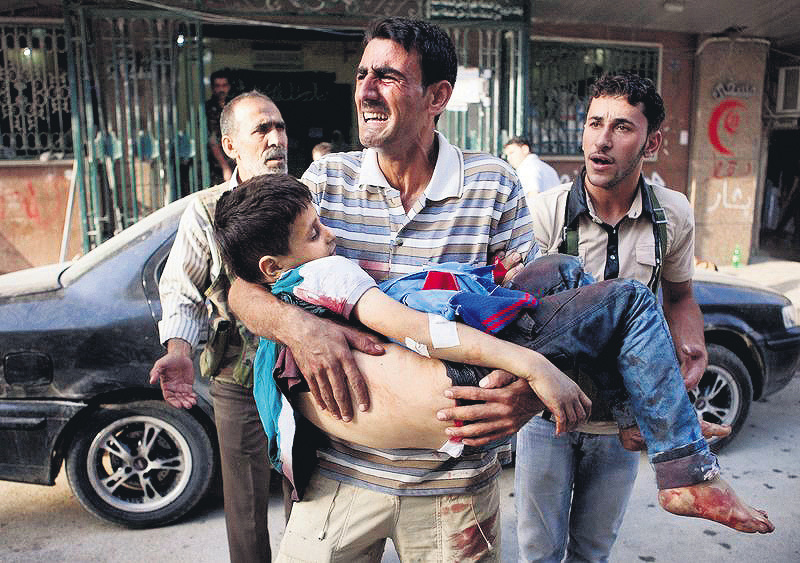 The international community’s failure to address the violence and humanitarian tragedy in Syria and Iraq was heavily criticized by Turkish officials, who condemned efforts by some to conceal incompetence through the disparaging of Turkey

Top Turkish officials admonished Western countries and global bodies for their proclivity to pontificate while ignoring the plight of the people of Syria and Iraq.

President Recep Tayyip Erdoğan, speaking in Istanbul on Friday said the EU tried to disparage Turkey's efforts to address the Islamic State of Iraq and al-Sham (ISIS) violence, the Assad regime's crimes and the instability in Iraq, saying that while Turkey spent $5.5 billion on the more than 2 million refugees from Iraq and Syria, the EU as a whole deemed it appropriate to help with just 250 million euros. His statement came the same day as the U.N.'s World Food Program announced that it could no longer help refugees in Turkey due to a lack of funds provided by donors, adding that it had asked the Turkish government to take over assistance in nine camps.

Prime Minister Ahmet Davutoğlu, who is in New York, echoed the president's outrage, criticizing the U.N. and the international community for failing to formulate a way out of the quagmire in Syria and Iraq. The belated efforts by Western countries were not comprehensive enough to eliminate threats posed by ISIS or the Assad regime, he said, criticizing those who wanted Turkey to fight ISIS alone while they remained in the background. Davutoğlu also criticized Western countries that asked Turkey to stop foreign nationals from joining ISIS. "When I asked them to share the names of those who could join ISIS, I was told they couldn't because the individuals in question had committed no crime. How can we stop people without reason when these same countries don't share any intelligence?" he asked.

Meanwhile, Turkey continues to prepare for another possible refugee influx, with Deputy Prime Minister Numan Kurtulmuş saying on Friday that there is a serious possibility of a huge refugee flood toward Turkey once an offensive against ISIS in Mosul begins. "However, as AFAD [Prime Ministry Disaster and Emergency Management Authority] was capable enough to receive 197,000 people from Kobani within three days, it will be ready for any future eventuality" he said.

Turkish Prime Minister Ahmet Davutoğlu on Thursday criticized the United Nations and the international community for not showing a clear response to resolving the Syrian conflict and expressed concerns about a new influx of refugees fleeing the regime attacks on Aleppo.

Speaking to reporters at the U.N. following his meeting with Secretary-General Ban Ki-moon, Davutoğlu said the international community and the U.N. Security Council had not set a clear strategy regarding the Syrian crisis until recently.

They "didn't have a clear response and reaction to war crimes committed by the regime, when the regime used chemical weapons against civilians, when the regime sent Scud missiles to urban areas including Aleppo," he said. Davutoğlu said U.N. Special Envoy for Syria Staffan de Mistura was trying to do his best to implement a local freeze in Aleppo, but when asked about what the "plan B" would be if those efforts failed, he said, "Where is the plan A, forget about the plan B."

U.N. special envoy de Mistura proposed in October a plan to suspend fighting in Aleppo to allow for the distribution of humanitarian aid and lay the groundwork for broader peace talks. Aleppo, which has been divided between government-controlled and rebel-held areas, has been rocked by heavy fighting over the past few days, dimming hopes that the U.N. effort will yield results. Syria has been gripped by almost constant fighting since the regime of President Bashar Assad responded to anti-government protests in March 2011 with a violent crackdown, sparking a conflict that spiraled into a civil war.

"The Syrina regime, that has been spoiled by an approach as if they were now legitimate because they were fighting against ISIS, is intensifying airstrikes against Aleppo, which may create a new flow of refugees," he said. "We should not allow the regime to exploit the presence of ISIS (the Islamic State of Iraq and al-Sham) and to continue to attack Aleppo," he said.

The conflict has claimed nearly 210,000 lives and prompted an unprecedented refugee crisis that made Turkey the world's largest refugee-hosting country with more than 1.6 million Syrian refugees.

The security vacuum created by the Syrian conflict has also paved the way for extremist groups such as ISIS to gain a foothold in the region. As many as 3.8 million Syrian refugees are registered in neighboring Turkey, Jordan, Lebanon and Iraq, according to the U.N.

Davutoğlu said there are concerns that hundreds of thousands of new refugees could approach Turkey if the regime attacks on Aleppo continued. "That is the U.N.'s responsibility to stop this type of refugee flow and stop war crimes against the people of Aleppo and the people of Syria," he said. On Thursday, "barrel bomb" attacks by regime forces on Aleppo claimed at least 20 civilian lives, it was reported. Davutoğlu said allegations that Turkey was not doing enough regarding the Syrian crisis and the presence of ISIS is "misleading."

"No country has been affected more than Turkey because of the Syrian crisis. We have 2 million refugees. In some cities like Kilis, Syrians outnumber the Turkish citizens. Turkey received 200,000 refugees in two days from Kobani. This is more than the total number of refugees having been taken by all European countries in the last three years," he said.

He said that there is no state or authority on the other side of Turkey's 800-mile (1,295-kilometer) border with Syria and Iraq and as a result Turkey has been faced with big challenges.

"Sitting in New York or other cities and capitals and judging the situation in Turkish-Syrian and Turkish-Iraqi borders is easy. What is difficult is to understand the situation. We expect the international community to do more regarding the humanitarian crisis," he said.

Davutoğlu also called on countries to cooperate more in terms of intelligence sharing to prevent ISIS from recruiting new militants.

"Turkey is receiving 35 million tourists every year. We need intelligence reports from countries who have some mobility of these groups in order to prevent them from coming to Turkey or in order to deport them," he said. "Last year, we deported around 2,000 people from Turkey and around 10,000 were not allowed to come in Turkey. When we receive intelligence reports from our allies or other nations, it is easy to act together. This is what we need and what we expect," he added.
Last Update: Mar 07, 2015 11:03 am
RELATED TOPICS