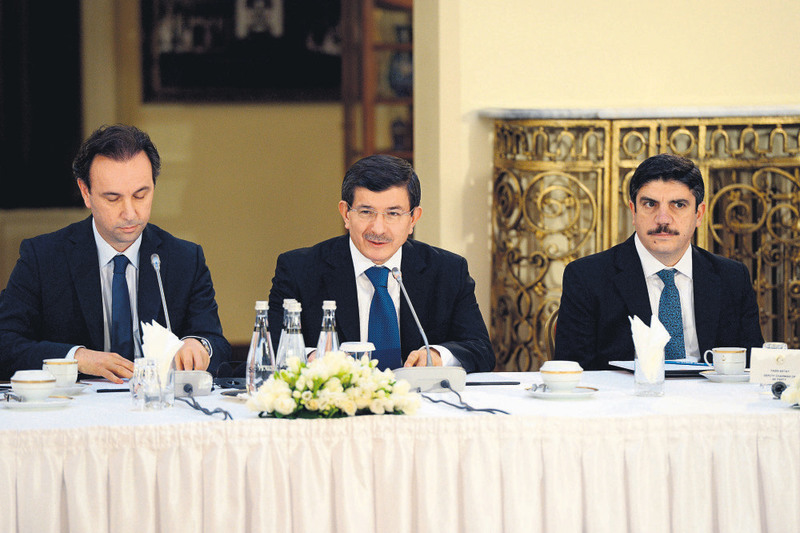 Prime Minister Ahmet Davutoğlu has expressed support for democracy in Syria, a place which he said has suffered at the hands of the Assad regime, while addressing the opposition Syrian National Council in Ankara, declaring the Syrian opposition as the voice of a new Syria

Prime Minister Ahmet Davutoğlu, in an address in Ankara on Friday to the opposition Syrian National Council (SNC), said that a new Syria in which all Syrians can live together in peace should be established. Meeting with SNC members, Davutoğlu said that Turkey always stands shoulder to shoulder with the Syrian people and supports a democratic Syria. The prime minister mentioned that for the last four years, Syrians have been a symbol of the honorable fight in the region and still face violence from the regime of President Bashar Assad.

Davutoğlu said Syrians need a democratic country where all social segments are represented in a peaceful atmosphere. He further described the SNC as the representative and voice of the new Syria."We have been witnessing the pains of our Syrian neighbors for the last four years," he said, highlighting that despite all the bombing, conventional weapons and pains they face, Syrians have not given up.

Underscoring that the SNC is the most legitimate representative of Syrians, Davutoğlu said that 300,000 people have lost their lives in Syria while nearly 5 million have had to flee the country in an attempt to find shelter in neighbor countries. He added that Turkey currently has 2 millions refugees including 1.7 million from Syria and 300,000 from Iraq.

The SNC is a Syrian opposition coalition formed during the Syrian civil uprising against the Assad regime in Syria in 2011 and is based in Istanbul.

Davutoğlu added that Turkey's doors are always open to the Syrian people since they are from a sister country bounded by history.He said that Syrians are in a bind in Syria between the Assad regime and the Islamic State of Iraq and al-Sham (ISIS), which once was allied with the Assad regime, and is now spreading terror and fear.

Turkey has maintained an open-door policy since the Syrian civil war erupted in 2011 and nearly 2 million Syrian refugees have taken shelter in Turkey over the last four years. ISIS, which controls land only a few kilometers away from the Turkish border, and continuously increasing numbers of refugees in Turkey, has caused the government to ask for more assistance from Western countries and the U.N.

The prime minister asserted that there are some attempts at trying to break the influence and weaken the representative power of the SNC and added that unity and cooperation is significant for the SNC to maintain its representation of the Syrian people.Explaining that the 2011 Arab Spring was portrayed as a democratic movement but faltered to some oppressive regimes, Davutoğlu said that the key country in this regard is Syria and if the Syrian revolution reaches its goals designated four years ago, the entire Middle East would be affected and would draw a new road map for the region.

Touching on the Tomb of Süleyman Shah, the only Turkish exclave, Davutoğlu said that the tomb is one of the most important places in Turkish history and added that it is a common symbol for Syria and Turkey.

Thanking the SNC for its support when the tomb was evacuated in February, Davutoğlu said that since the only representative of Syria for Turkey is the SNC, Ankara informed the SNC President before the evacuation.

In an operation that began on February 21, the Turkish military successfully extracted 40 soldiers who had been guarding the Tomb of Süleyman Shah in Syria, the grandfather of the founder of the Ottoman Empire. The military force entered the site, which is considered sovereign territory by Ankara, with 39 tanks, 57 armored cars, 100 vehicles and 572 personnel. They completed the mission without encountering any skirmishes. The operation was carried out some 30 kilometers inside Syrian territory in an area controlled by ISIS.
Last Update: Mar 15, 2015 10:42 am
RELATED TOPICS