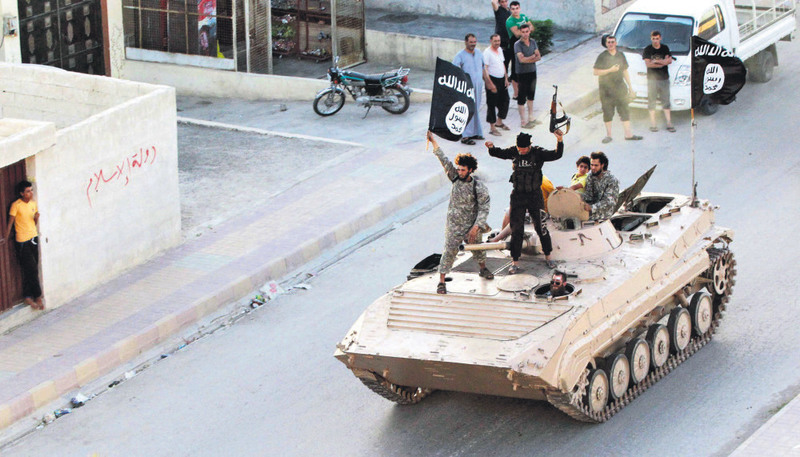 In an attempt to increase efforts in the fight against the Islamic State of Iraq and al-Sham (ISIS), following last week's talks among anti-ISIS coalition members, five subcommittees were established for normalization in Syria in the post-ISIS period.

The committees are Prevention of Terrorist Financing, Military Amendments, Stabilization, Strategic Communication and Foreign Terrorist Fighters. Due to its effective precautions and combating the flow of foreign fighters through its territory, Ankara reportedly undertook the duty of co-chair on the foreign fighters committee along with the Netherlands. Turkey continues to maintain a determined attitude in the fight against the flow of foreign fighters. According to Interior Minister Efkan Ala, 10,000 people from 91 countries have been banned from entering Turkey on the grounds of having links to ISIS, adding that 1,085 people from 74 countries were deported for similar reasons. The country stepped up measures along its 911-kilometer border with Syria against infiltration from the war-torn country and vice versa. However, Foreign Minister Mevlüt Çavuşoğlu has acknowledged that the country will never be able to make the border completely secure.

Since ISIS captured the city of Mosul in Iraq last summer, Turkish leaders have called for broader cooperation to fight ISIS in the region and prevent militants from joining the group, which also threatens the West.

On every possible occasion, including the NATO summit in Wales and the G20 summit in Australia, Turkish leaders have said international cooperation and intelligence sharing is vital to combat the influx of foreign fighters into ISIS-held regions in Syria and Iraq. Highly criticized after its failure to prevent the terror attacks in Paris, France also apprehended and interrogated its citizens who were deported by Turkey. In some cases, deported French citizens arrived back in Turkey to join ISIS, but were sent back to France again.

Almost a quarter of the foreign fighters who have been recruited recently by ISIS are European citizens. According to data released by the EU's law enforcement agency, Europol, it is estimated that there are between 10,000 and 12,000 foreign fighters in ISIS.

As Turkey exerts efforts to prevent foreign fighters from traveling through Turkey to join ISIS, seven countries – Denmark, Spain, the U.K, France, Jordan, Russia and Saudi Arabia – have so far sent letters of thanks to Turkey for its efforts in the foreign fighter crisis from which EU countries suffer the most.

In its letter to Ankara via the Interior Ministry, Russia reportedly said that international terrorism reached a serious level and Turkey's efforts in this regard are welcomed by Russia.

Scotland Yard – the Metropolitan Police Service in London – has also thanked Ankara for its efforts in stemming the flow of foreign fighters.

Among Ankara's contributions, there are two subcommittees, including the foreign fighters committee and stabilization committee, which are expected to work on post-ISIS life in the region.

Reportedly, upon a demand from Ankara, a statement highlighting that the committee will work to end the chaotic atmosphere and to establish a stable regime in Syria has been added to the committee's brief. With this statement, Ankara wishes to stress that a Syria without President Bashar Assad is necessary for the region and to push the anti-ISIS coalition to acknowledge it.

After it was revealed by Ankara that a suspect working for Canadian intelligence service that actively took part in the coalition fighting ISIS aided three British girls in joining the terrorist group in Syria last week, Turkey reportedly detained three British youths trying to travel to Syria through Turkey. Two of them were detained at Sabiha Gökçen Airport after a flight from Barcelona to Istanbul, one of them, who is 19 years old, along with one other, were detained and are expected to be returned to the U.K. soon.
Last Update: Mar 16, 2015 9:36 am
RELATED TOPICS