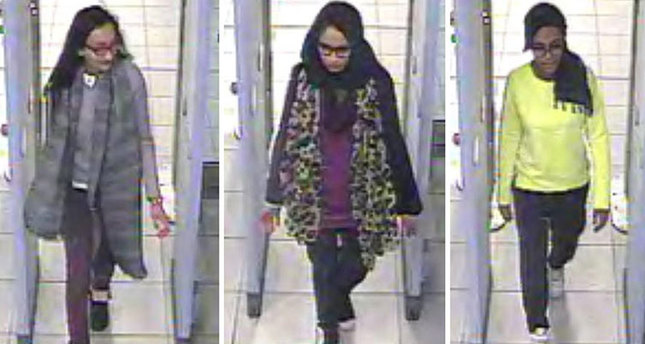 by Ayşe Şahin Mar 15, 2015 12:00 am
There has been dead silence both from Canadian authorities and Western media outlets over the outbreak of allegations that were first reported by Turkish media outlets revealing possible involvement of Canada's spy agency in aiding a Syrian human smuggler who helped British teenage girls join the Islamic State of Iraq and al-Sham (ISIS) in Syria. The fresh details of the story that directly concerns the Canadian government has received little interest from Western media outlets, which have either chosen not to cover the story or have allocated little time to the incident. The Western media outlets that ran the story of the three teenage girls who left Britain to join ISIS in detail when it first broke have not followed up when further details that shed more light on the incident surfaced. The West's apparent reluctance to cover the details that reported Canada's alleged involvement in the incident has raised some eyebrows. The Guardian, a British daily, is among a series of media outlets that has ignored the new details of the incident that has shaken Turkey and should be covered in British papers as well.

A spokesman for Canada's Ministry of Public Safety and Emergency Preparedness responded to the inquiry and said Canada was "aware" of the reports but "will not comment on operational matters of national security." The Canadian Embassy in Turkey declined to comment on the matter on Thursday as well. Meanwhile, the Canadian opposition is unsettled about the lack of comments by government officials and has been seeking a response to the allegation.

The opposition pushed Prime Minister Stephen Harper's government on Friday in a question-and-answer session over the alleged link to the Canadian Embassy in Jordan, which they stressed is run by 'Harper's handpicked ambassador'. New Democratic Party deputy leader Megan Leslie also asked for confirmation that someone linked to Canadian intelligence, "either an employee, an agent or an asset, is being detained in Turkey."

It began with a statement from Foreign Minister Mevlüt Çavuşoğlu on Thursday that a member of a foreign intelligence service that actively took part in the coalition against ISIS aided three British girls in joining ISIS in Syria.

He went on to say that the person was working for the intelligence service of a country "that is a member of the international coalition" against ISIS, referring to the U.S.-led force carrying out airstrikes against the armed terror group. He refrained from naming the country other than saying that it is "not the United States or a European Union country." The coalition also includes several Arab countries as well as Australia and Canada.

A Haber, an Istanbul-based news network, released footage showing the man, identified as Mohammed al-Rashed, speaking to the girls in a Turkish town near the border before the trio board a vehicle to cross into Syria. The footage recorded in Gaziantep, captured by a hidden camera by Rashed, shows him welcoming the girls as they exit a taxi.
Last Update: Mar 16, 2015 11:09 am
RELATED TOPICS