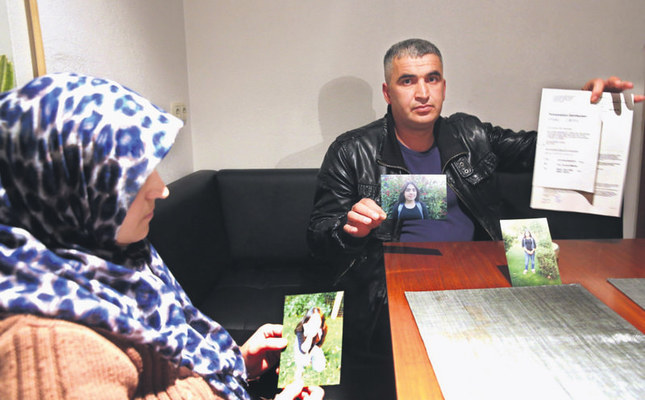 The Yilmazoglu family from the German town of Lieblos said that their 12-year-old daughter was taken away from them by child protection office officials without providing any explanation
by Fuat Uğur Mar 24, 2015 12:00 am

The Turkish community in Germany, whose numbers make them society's largest minority group, expressed its sorrow as the Jugendamt, Germany's child welfare agency, took away their children with ‘made up excuses' leading to the destruction of many families

"Beware of the Jugendamt, hide your kids." This is exactly how all the immigrants in Germany, particularly families of Turkish origin, feel in the face of the Jugendamt, Germany's child welfare agency. Families are afraid to take their children to the hospital or to a psychologist. Sharing their children's problems with their teachers at school might make their lives miserable, and bring some devastating consequences because it is possible that they will inform the Jugendamt. The Toprak family is one such family. Their child was seized when they took him to a hospital after he had chips stuck in his throat.

The same fear prevails in the whole of Europe. Last week, a Turkish couple living in Norway, Halil and Sultan Kiriş, had a nightmarish experience because their three-year-old daughter Hira told her dream about Hulk, the comic book character, to her teacher in kindergarten. What she said led the state to seize the couple's three children. Upon the intervention of Turkey's Foreign Ministry, the problem was resolved, and the children were returned to their parents.

Everyone is not as lucky as the Kirişes. A parent in Germany is still in a legal struggle with the Jugendamt since it seized his three children on the grounds that he "spoils their children and shows excessive attention." The family is miserable and the situation of the children goes without saying.

There are thousands of similar cases.

This is a cruel economic wheel.

This wheel crushes children and their families between its gears since every extra child means more money.

At least 35,000 children are required to be separated from their families annually for this wheel to run. Thousands of personnel, teachers, lawyers, doctors, nurses and dormitory officials earn their living from this wheel, which contributes to employment. According to 2011 data, the overall number of employees in the institution is predicted to be around 50,000. It has been estimated that this number goes up to 576,000 when the ministry and other supporting institutions are added. The German government allocated a budget of 32.2 billion euros ($35.2 billion) to this institution in 2012. And since municipalities provide annual help of 50,000 euros per child, the only concern left is who gets the money.

The Jugendamt gets paid by the state according to the number of children it takes care of, and some foster parents manipulate childcare issue for their own economic interests. Such factors undermine the operation of the institution, which was originally founded with goodwill.

According to data that was released in 2013, the Jugendamt has worked with 42,123 children and 13,240 of them are allegedly of immigrant origin. The rate of seized foreign children is three times more than German children, since immigrant families are poorer and more defenseless as they often cannot afford to hire a lawyer or demand their rights. Besides, they are not familiar with the conventions in the country and, as a result, they feel increasingly lonely and helpless in the country that marginalizes them.

But still, the exact number of immigrant children that are put under protection in Germany is not known, since the children are registered as German citizens in the forms recorded after their seizure. However, according to the Vienna Convention on Consular Relations signed in 1963, consulates must be informed when a child's guardian changes if he or she is not a citizen.

The total number of children that were put under protection since 1995 exceeds 600,000. And it is not certain how many of them are immigrants.

While implementing a state policy, the Jugendamt actually has a few more benefits apart from economic profit.

First, immigrant children are culturally assimilated, as German foster parents detach them from their parent's culture, language and the religion of their home.

Third, assimilated immigrant children no longer pose a "threat" and make a significant contribution to the resolution of the demographic problem of Germany, which will have fallen by the year 2050, according to reports.

However, both the U.N. Convention on the Rights of the Child and the German constitution assert that the children must not be separated from their own families, language, religion or culture. German laws prescribe that foster parents must be chosen firstly among relatives, and if there is no relative, they must be selected from the families belonging to the same language and culture as the child.

As long as this inhumane practice continues, Germany could eventually be charged for exterminating another ethnicity through "more refined" methods, this time 85 years after the first attempt.