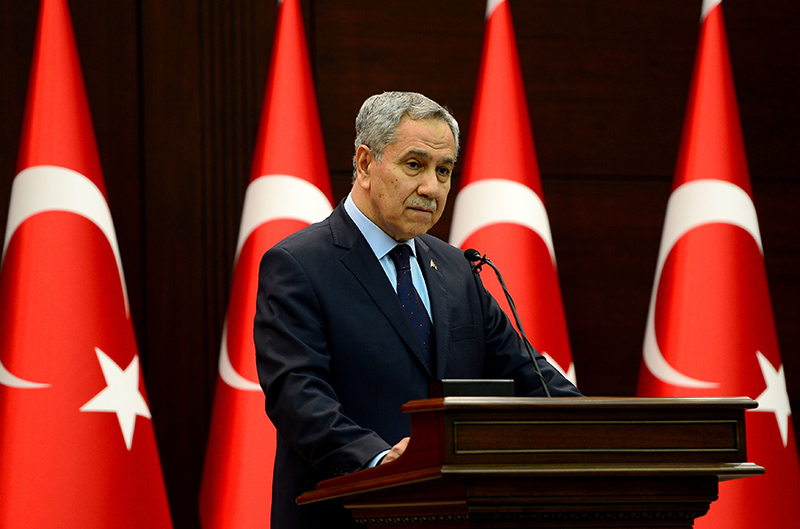 | Photo: AA
by Nurbanu Kızıl Mar 25, 2015 12:00 am
Deputy Prime Minister Bülent Arınç responded to Prime Minister Ahmet Davutoğlu's statement regarding his dispute with Justice and Development Party (AK Party) Ankara Mayor Melih Gökçek by saying that Davutoğlu is right and that he should not have been involved in such a dispute. Gökçek on Wednesday has said he will not say anything further on the matter to avoid fueling the debates that are aimed at hurting his party, putting an end to the spat. The statements from the two who participated in the row came after Davutoğlu said the bitter words they exchanged were inappropriate and that the party discipline will be implemented when necessary.

Arınç's statement came on Tuesday as he responded to questions posed by reporters at Parliament. He said that even though the prime minister is right for saying that he should have avoided the controversy due to his position, Arınç said that he could not hold himself back from responding to such a disrespectful interference in his private life. "I had to say something to the person who claimed I was affiliated with the Gülen Movement, by making implications about my family," he said, and added that he will never allow provocateurs to claim that there is a dispute within the AK Party and that he is on one of the sides.

Arınç also responded to Gökçek's claims that he would be filing a lawsuit against him. "I harshly criticized him" he said, adding that they would take it to the courts if his statements are considered insults, explaining that Gökçek should think about who would lose the case.

The dispute between Gökçek and Arınç took place on Monday when Gökçek accused Arınç of being affiliated with the Gülen Movement, being an instrument of the opposition and creating disagreement within the AK Party and called on him to resign.

In response to Gökçek's allegations, Arınç said that he perceives the Gülen Movement as a threat to the state and condemned the allegations. He also said the mayor is undignified, and was making the allegations for his own personal benefit.

"Gökçek is not a figure who has enough dignity to ask for my resignation" Arınç said, and added that Gökçek's statements were shameless. He also said that he had been opposed to Gökçek's candidacy in 2009 and 2014 along with other prominent party figures, and claimed that Gökçek was trying to defame him in order to guarantee his son's candidacy in the upcoming general elections.

Davutoğlu held a closed-door meeting with Gökçek at the Prime Ministerial Residence in Ankara late on Tuesday. A day after the meeting Gökçek said he will not say anything more on the matter. He said the prime minister had told him to avoid such disputes that could fuel debate by the public, adding that he will comply with the order.