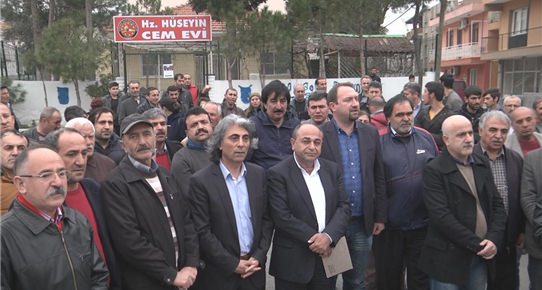 | Photo: AA
by Nurbanu Kızıl Mar 28, 2015 12:00 am
The municipal government of İzmir's Çiğli district, run by the opposition Republican People's Party (CHP), is being criticized for shutting down a cemevi, an Alevi house of worship. The controversial closure comes two days after the CHP introduced a bill in Parliament calling for official recognition of cemevis as houses of worship.

According to reports, the municipality accused the Universal Alevi Bektaşi Association, which opened the cemevi, of illegal renovation because a painter was painting the walls and shut it down. The former police station was allocated to the association for use as a cemevi by the central government.

Çiğli Mayor Hasan Arslan said that his administration had wanted to use the empty building as a day care center for preschoolers, but the government had granted it to the Alevi community to be used as a cemevi. He claimed that the government's decision was based on political motives prior to the general election.

Universal Alevi Bektaşi Association President Ali İhsan Şahin, a prominent community leader, said that the closure was a political decision and accused the CHP of being hypocritical. "On the one hand, they say they support the recognition of official status of cemevis, but on the other hand they seal it off and close it. This is pure hypocrisy," Şahin said, adding that they would take the municipality to court.

Local administrations of several Turkish provinces, including Istanbul, Edirne and Zonguldak, have recognized cemevis as official places of worship.

Mayor Arslan said he was opposed to it because the site was unsuitable for a cemevi. "It is next to a primary school and is on the main street. The people living nearby and students are complaining. We have already assigned certain empty lots to be used as cemevis. This should not be forgotten." He said the building would be used as a day care center after getting the necessary approvals. Some local Alevi groups also supported the mayor's decision, calling for the demolition of the building.

The first official guests at Turkey's new presidential palace, hosted by the president, were Alevi citizens, as they were welcomed for an exclusive fast-breaking dinner called Muharrem Aşı in November.

An Alevi high school is currently being built in the Halkalı district of Istanbul on land allocated for that purpose by the Education Ministry for the training of new Alevi community leaders.

The government pledges to fulfill the financial and recognition expectations of Alevis through a series of reforms and initiatives.

In recent years, the AK Party government has taken numerous steps to respond to the needs of ethnic and religious minorities in Turkey as part of democratization packages. In this regard, the government holds meetings with Alevi community leaders and academics to understand and define their issues and find permanent solutions.

It is estimated that there are over 10 million Alevi citizens in Turkey, corresponding to around 15 percent of the country's population.