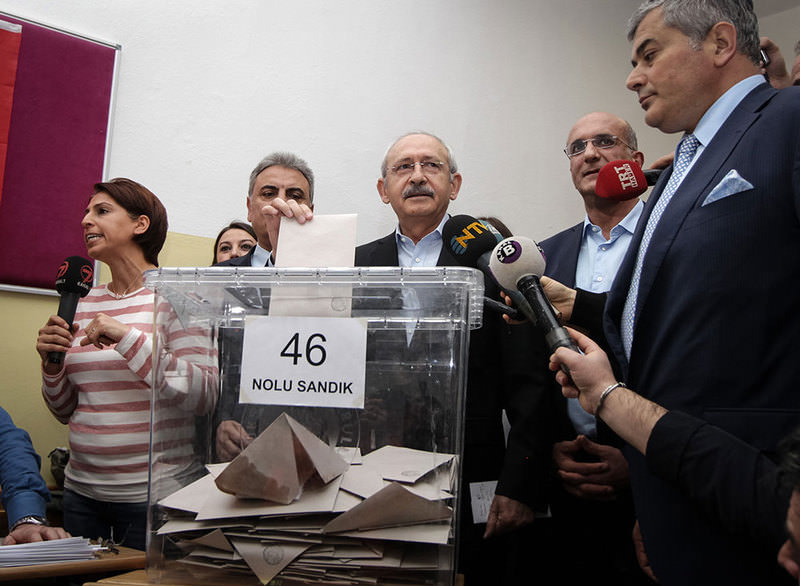 A total of 760,000 CHP members were allowed to vote in the primaries, which were supervised by judges. The voting ended at 5:00 p.m. while only 50 percent of the party members cast their vote.

CHP leader Kemal Kılıçdaroğlu, who ran in the primaries from İzmir's 2nd region, had put forward his name in the provincial primary election list and received approximately 31.000 votes to be the first candidate from İzmir to run for the Parliament.

Nearly all influential figures of the party, including former Chairman Deniz Baykal, have participated in the primaries as candidates. A total of 2,822 people have applied to the CHP for candidacy nomination for the parliamentary elections, and the party determined 364 out of its 550 candidates through the primaries. There are also nominations reserved for women, the disabled and party administration in electoral districts that are perceived as guaranteed.

Kılıçdaroğlu recently met with Brookings Institute vice president and former Cabinet member Kemal Derviş, in which the former economy minister refused the offer of involvement in active politics with the CHP. Kılıçdaroğlu said to the press that Derviş told him he would join the CHP ranks if the party gets enough votes to form a government.

Kılıçdaroğlu, who became a laughing stock when he failed to vote in the 2010 referendum, was not able to vote for himself in the primary elections on Sunday. The CHP leader, who is planning to run from İzmir, had put forward his name in the provincial primary election list. However, on the party delegate lists, Kılıçdaroğlu's name was not among those who are allowed to vote in İzmir. The opposition leader voted where he is registered in Ankara for the party's parliamentary candidates, but was not able to vote for himself in İzmir.

Kılıçdaroğlu, who took over as CHP chairman in May 2010, led the no vote against the government's 2010 referendum on constitutional reforms that aimed to alter certain parts of the 1982 Constitution. His associates realized the party leader could not vote in Istanbul because he had failed to get his address change registered. Kılıçdaroğlu went to Ankara for the vote on the referendum under the assumption that he could vote as a deputy, but when this turned out to be false, the leader, who during his campaigning admonished all who failed to vote as irresponsible, failed to vote.

CHP İzmir Provincial Secretary Osman Peri said the primaries took place under a judge's supervision and because Kılıçdaroğlu's name was not on the delegates list, he would not be able to vote in İzmir. CHP headquarters in Ankara previously said they had no idea where Kılıçdaroğlu would vote.