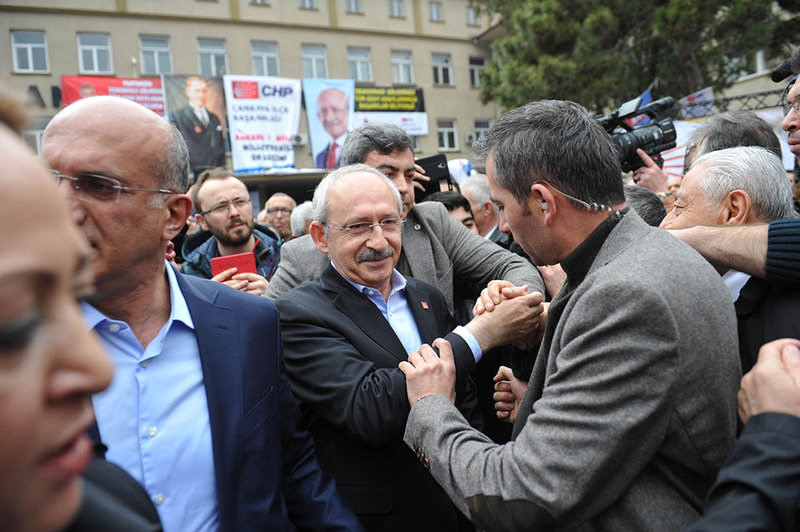 by Sinan Öztürk Mar 30, 2015 12:00 am
Turkey's main opposition Republican People's Party (CHP) has held primaries in 41 provinces and 45 electoral districts to determine its candidates for the upcoming parliamentary elections on June 7. However, only 50 percent of the total 760,000 CHP members cast votes, and this limited participation was enough to change party dynamics. The official results have not yet been announced for several districts, however, current results show that the party administration successfully passed the primaries, which also functions as a vote of confidence ahead of the elections, while the interparty opposition lost blood. Party members eliminated at least seven current deputies as they failed to get on the lists of their respective provinces, while many other deputies were surpassed by other candidates to be ranked lower on the CHP list.

CHP Chairman Kemal Kılıçdaroğlu was unable to vote for himself in İzmir and cast his vote instead for Ankara candidates. He received around 85 percent of the votes in İzmir's second electoral district, which is known for its strong support for the CHP along with strong neo-nationalist sentiments. Since first place is reserved for female candidates in this electoral district, which provided seven deputies to the CHP in the 2011 elections, Kılıçdaroğlu will comfortably run as the CHP's second place candidate. Former journalist and current CHP deputy Mustafa Balbay, who was imprisoned for more than four years during the Ergenekon trial, was the runner-up in İzmir's second electoral district.

Former Chairman Deniz Baykal, who was Antalya deputy of the CHP for eight electoral terms since 1973 and who poses an important challenge to Kılıçdaroğlu, only finished third. Baykal was surpassed by former provincial Chairman Devrim Kök and former Mayor Mustafa Akaydın.

Important figures from Baykal's term also had disappointing results. Former CHP Vice President Adnan Keskin failed to rank in the first seven candidates that make up the total number of deputies for the western province of Denizli. Another former secretary-general, Önder Sav, failed to rank in the first five candidates in Ankara's first electoral district and was surpassed by former provincial Chairman Necati Yılmaz and current deputy Aylin Nazlıaka. Dilek Akagün Yılmaz, a prominent figure of the neo-nationalist wing of the party, also failed to make the list in the central province of Uşak. Another prominent neo-nationalist, Nur Serter, ranked 25th in Istanbul's first district.

Meanwhile, Istanbul's second district saw the tightest race due to the profiles of the candidates. Former Şişli mayor and CHP Istanbul candidate in the 2014 local elections, Mustafa Sarıgül, finished in fifth place and was surpassed by current deputy Aykut Erdoğdu and Dursun Çiçek, a former colonel who was imprisoned for four years during the Ergenekon and Balyoz (Sledgehammer) trials. Gülay Yedekçi and Didem Engin, female candidates with little public recognition, were among those who surpassed Sarıgül, along with many female candidates who received successful results.

Former prosecutor and current deputy İlhan Cihaner, another important figure from the Ergenekon trials, topped the list in Istanbul's third district. Oğuz Kaan Salıcı, Istanbul's provincial chairman who resigned from his post to run for Parliament, was surpassed by at least four candidates in Istanbul's first electoral district.

Almost all current deputies that showed strong performances in the primaries have been very active in social issues and protests that have taken place in the last couple of years. Manisa deputy Özgür Özel, who was very active both before and after the Soma and Karaman mining disasters, won Manisa primaries by a great margin. Mahmut Tanal, another deputy who actively participated in protests in Istanbul, finished third in Istanbul's first electoral district. The success of former suspects of the controversial Ergenekon and Balyoz trials, which were initiated by police officers and prosecutors with alleged links to the Gülen Movement, was also noteworthy.

Along with nationalist MHP, who had recently reelected its chairman Devlet Bahçeli almost unanimously, the CHP seems to be heading to the elections with a relatively harmonious inner party environment, unlike previous elections. Both parties were shaken by sex tape scandals prior to the 2011 elections, which resulted in Deniz Baykal and two MHP vice presidents resigning from their posts. The government later accused Gülen-linked police officers of obtaining illegal footage to disrupt the parties.