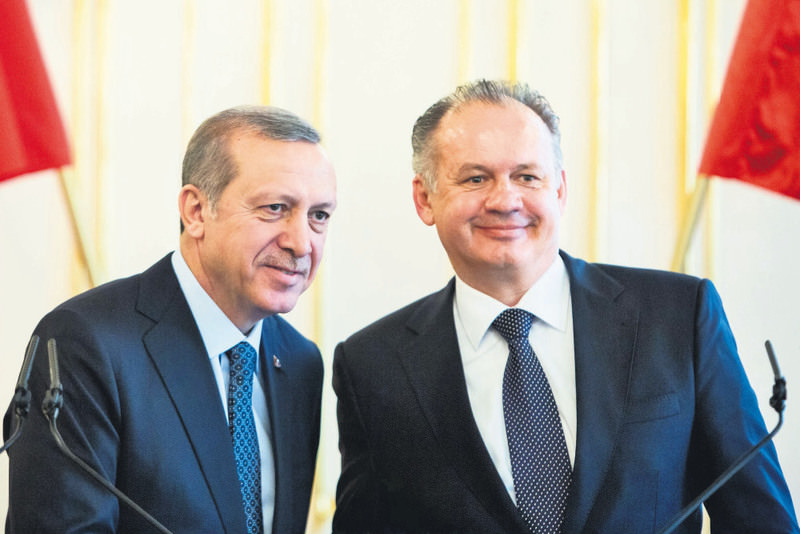 by Mehmet Solmaz Apr 01, 2015 12:00 am
After his diplomatic visit to Slovenia on Monday, President Recep Tayyip Erdoğan paid an official visit to Slovakia yesterday where he was welcomed with an official ceremony by Slovakian President Andrej Kiska in the capital city of Bratislava. Slovakia, which will assume the presidency of the EU in 2016, reiterated its firm support for Turkey's EU bid. "I would like to say that Slovakia is in cooperation with Turkey and supports its EU bid. The candidacy of Turkey will benefit both the EU and Turkey," Kiska said. Erdoğan said the inconsistent relations between Turkey and the EU will be strengthened with Slovakian term as EU president in 2016.

Participating at the Turkey-Slovakia Business Forum, Erdoğan said that Turkey understands the concerns of Eastern European countries on energy supply security and offers its partnership. As an energy-dependent country, Turkey is working to provide alternative sources of natural gas through the deals the country currently has with Russia, Azerbaijan, Iraq and Iran. Erdoğan said that the routes can be connected and Turkey may provide a sustained energy supply for Eastern Europe. He also called on Turkish businesses to invest more in Slovakia and said new highway and housing projects in Slovakia can be good opportunities for Turkish contractors. He pointed out that Turkey's construction sector is the second-biggest in the world after China.

On the first leg of his tour through Eastern Europe, President Recep Tayyip Erdoğan paid a visit to Slovenia where Slovenian President Borut Pahor said his country firmly supports Turkey's EU membership bid and looks forward to expanding economic cooperation with the country.

"Our high-level official visits are increasing with Slovenia. These visits are an indicator of the strengthening economic and political relations between the two countries," Erdoğan said. He later left the Slovenian capital city of Ljubljana for Slovakia, to be followed by a visit to Romania on Thursday.

After arriving in Bratislava in the early hours of Tuesday, the president was welcomed by a large crowd of Turkish citizens in the city. Giving a short appreciation speech at the hotel he arrived at, Erdoğan assured the crowd that the state will not give a chance to those who want to divide the country, accusing certain pro-Kurdish politicians of abusing the reconciliation process that aims to end the decades-long conflict with the PKK.

"In my country, my Turkish brothers and Kurdish brothers have some problems. In addition, the Circassian, Abkhazians, Bosnians, Albanians who live in Turkey have some problems too. Some are willing to divide Turkey. We won't give them a chance to achieve this bad goal. We will remain in solidarity," the president said. Last week, Erdoğan said that Turkey did not face a Kurdish problem, but that the country's Kurdish population might have problems. He reiterated his stance during his Slovakia's visit as well.

About the upcoming Turkish general elections, he asked Turkish citizens living in European countries to make use of their votes. "The ballot box is our honor; we will definitely use our voting rights." Turkey is due to hold elections on June 7 this year. Turkish people living in more than 50 countries can vote in Turkey's general elections. A total of 250,000 people out of Turkey's 2.7 million expat voters had earlier registered to cast their ballot at embassies and consulates.

Furthermore, Foreign Minister Mevlüt Çavuşoğlu will visit Moldova and the Autonomous Territorial Unit of Gagauzia of the Republic of Moldova on Thursday, followed by a visit to Lithuania, Ankara has announced.

Çavuşoğlu will meet Moldovan counterpart Natalia Gherman about recent developments in the region and international issues. The minister will also meet President Nicolae Timofti and Prime Minister Chiril Gaburici. Çavuşoğlu will visit Gagauzia "to have contact with its leaders and our kin," a Foreign Ministry statement said. The autonomous territory is home to a mostly Gagauz population - an Orthodox Christian, Turkic community. Çavuşoğlu will then head to Lithuania on Friday to meet his counterpart Linas Linkevicius and be received by President Dalia Grybauskaite and Prime Minister Algirdas Butkevicius.