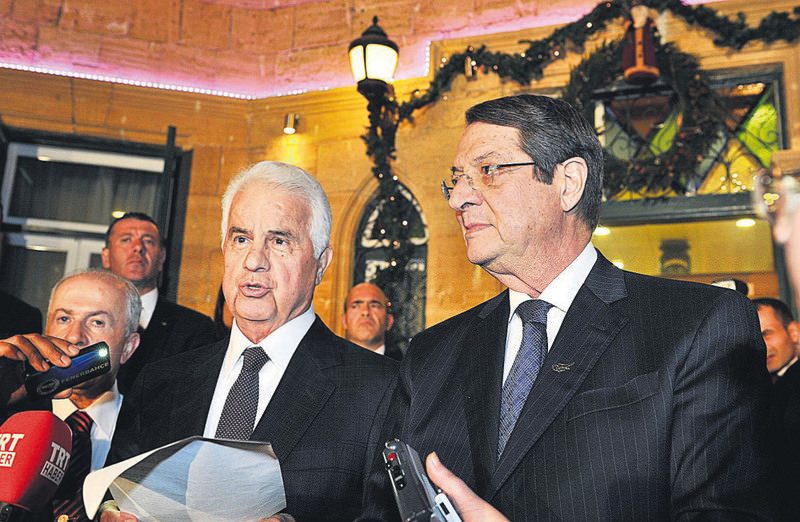 by Ali Ünal Apr 02, 2015 12:00 am
After a two-year hiatus, peace talks on the divided island of Cyprus were restarted last February and the talks were expected to gain momentum with U.S. Vice President Joe Biden's historic visit last May. However, the negotiations did not go as planned. Last July, Greek Cypriot President Nicos Anastasiades left the peace talks after a disagreement with Turkish Cypriot officials. Last November, Greek Cyprus unilaterally suspended the U.N.-led peace talks on the pretext of the hydrocarbon exploration actives of Turkey's Barbaros Hayreddin Paşa seismic vessel.

Hopes to restart the talks to reunify the divided island increased after both Turkish and Greek Cypriots considered a halt to hydrocarbon exploration activities. Turkish Cypriot Foreign Minister Özdil Nami said on Monday that the Barbaros Hayreddin Paşa will be sent back to Turkey and added that gas exploration activities will not be renewed if Greek Cyprus does not renew its own. Moreover, news agencies reported on Tuesday that U.N Secretary-General Ban Ki-moon's Special Advisor on Cyprus Espen Barth Eide will be travelling to Cyprus in April with hopes to restart the peace negotiations.

The peace negotiations are expected to restart after the Turkish Cypriot presidential election, which will take place on April 19. However, years of fruitless negotiations and perceived insincerity by Greek Cyprus has chagrined Turkish Cyprus. Speaking to Kıbrıs newspaper on Tuesday, Turkish Cypriot President Derviş Eroğlu said he does not think that Anastasiades is sincere, as he has excessive demands at the negotiating table. Eroğlu added that the Cyprus negotiations have been "going on for 47 years" and all chapters have been discussed and all views are known. Nami also shared similar sentiments in an interview with the daily Havadis on Tuesday. He said that there has been "absolutely no progress" during the past five years in Cyprus negotiations. Nami also described the entire period as being lost.

The Cyprus problem has been on the agenda of the world since 1974 when Turkey exercised its constitutional right as a guarantor by conducting a military operation following a coup by far-right Greek Cypriot extremist group, the National Organization of Cypriot Struggle.

In 2004 Greek Cyprus rejected the 2004 Annan Plan for Cyprus, which aimed for reunification of the island. However, Greek Cyprus was accepted as a member of the EU just a few weeks after of the referendum. Fruitless negotiations have continued with interruptions since that time.
Last Update: Apr 02, 2015 11:00 am
RELATED TOPICS