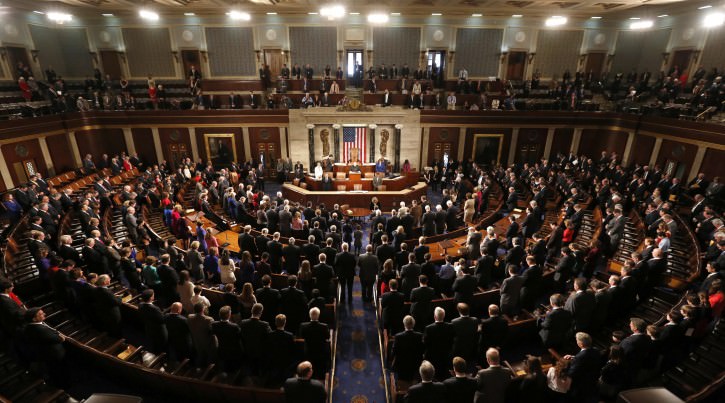 by Ayşe Şahin Apr 02, 2015 12:00 am
A U.S. lawmaker plans to introduce a bill asking the administration of President Barack Obama to designate a task force to pursue the amelioration of sour relations between Turkey and Armenia based on the common interests of the two countries. The proposed bill was mentioned by its sponsor, Republican Congressman Curt Clawson, on Thursday. It represents a landmark step since it signifies the first concrete move that is not detrimental to Turkey regarding the 1915 incidents, ahead of its centennial commemoration.

It is the first time such a draft bill, which aims to be constructive for Turkish-Armenian relations, has been proposed. It is significant since it differs in language to the bill currently in committee, which "Call[s] on the president to work toward equitable, constructive, stable and durable Armenian-Turkish relations based upon the Republic of Turkey's full acknowledgment of the facts and ongoing consequences of the Armenian Genocide, and a fair, just, and comprehensive international resolution of this crime against humanity." The new bill, which has yet to be introduced, has been prepared in deference to Turkey and its definition of the 1915 incidents, which has long been used as a means for the Armenian diaspora to generate political tension against Turkey. The proposed bill has been stripped of any mention of the Armenian genocide, highlighting its restraint from taking sides in a matter that has become overly politicized.

Turkish-Armenian relations have remained strained for decades due to Armenia's constant demand for Turkey, as well as other countries, to officially accept the mass forced deportations of Armenians to Anatolia during World War I as genocide. The latest in a series of such demands from the U.S government came when a bipartisan group of congressmen introduced an Armenian-lobby-backed Armenian Genocide Truth and Justice Resolution in mid-March. Republican Adam Schiff said that the draft resolution, if passed by Congress, would officially recognize the Armenian genocide and call upon Obama to work with the Turkish and Armenian governments to bring about reconciliation based on full acknowledgment of the historic fact of the Armenian genocide.

However, the Obama administration, which had pledged to acknowledge the incidents as genocide before he was elected, refrained from doing so during his term for fear of falling out with Turkey, a close ally of the U.S.

Clawson, in a letter he wrote to garner the support of congressmen, recalled that Turkey, a NATO member, had supported the West in its victory in the Cold War by allowing use of its military bases.

"Turkey and Armenia are very important to American interests," Clawson wrote in a letter to House colleagues in a bid to muster support for his resolution that seeks to find a settlement between the two countries. "U.S interests [in the region] can be enhanced by both countries acting to cultivate peace and understanding."

Clawson also said that the U.S has been attempting to enhance ties between the two countries since 2009, but has thus far failed to do so. He also added that Turkey, given its geographical location, is a significant partner in the fight against extremism, a partnership that is growing particularly valuable given deepening relations of the countries in the region with Iran and Russia, which are diminishing U.S power there.

Derya Taşkın, president of the New York-based Turkish Institute for Progress, has said the move is historic for being unprecedented, adding that the Turkish Institute for Progress is also working to help thaw Turkish-Armenian relations. She also said Clawson has underscored the necessity of pondering the next hundred years instead of the past to mend Turkey-Armenia relations.

Turkish officials have been exerting considerable efforts to improve relations with Armenia by reinstating rights and confiscated property that had been taken from them since the founding of the Republic, after decades of apathy. Steps have also been taken to provide them with representation in Parliament.

President Recep Tayyip Erdoğan also made an attempt to thaw tensions between the two countries by issuing a message ahead of the 99th year commemoration of the 1915 incidents last year. In an unprecedented move, while he was prime minister, Erdoğan extended condolences to the grandchildren of Armenians who lost their lives in the 1915 events.

However Armenian President Serzh Sargsyan, in a purported refusal to reconcile with Turkey, said he had withdrawn the peace accords with Turkey from parliament.

The two countries' then foreign ministers, Ahmet Davutoğlu and Eduard Nalbandyan, had signed protocols to establish diplomatic ties between their respective countries in 2009 in Switzerland. Mediated by the U.S., the protocol had presupposed the opening of the border between Turkey and Armenia, but it was failed to be ratified.

Following the incident, Erdoğan complained that Armenia had failed to reciprocate Turkish peace efforts, but said that Ankara will still pursue a settlement with Armenia. Foreign Ministry Spokesman Tanju Bilgiç also said: "Turkey will remain committed to the normalization process it pursues as the main purpose of the protocols."

The official Turkish government stance on the claims of genocide is that it acknowledges that a tragedy occurred with great suffering on the part of the Armenians, but that Muslim Turks also suffered during the event. They have repeatedly called on Armenia to check unbiased historical sources to bring the matter to light.