Deadly DHKP-C attacks suspected to have links with Syrian regime 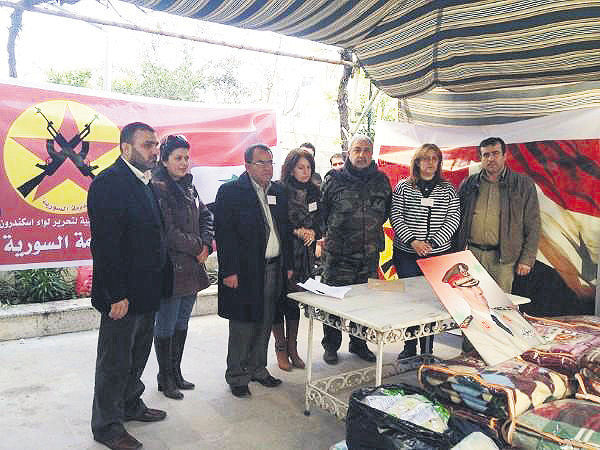 After perpetrating two deadly attacks in Istanbul in the last week, the Revolutionary People's Liberation Party-Front (DHKP-C), which was listed as a terrorist organization by Turkey, the U.S. and EU after targeting security officials, high-profile politicians and carrying out suicide bombings, is suspected of being influenced by the Syrian regime. The regime is known for harboring militants linked to the organization by giving and guarding a building in Latakia, Syria for training under the supervision of Mihraç Ural, a top militant from the Turkish People's Liberation Party-Front (THKP-C), a predecessor of the DHKP-C, and the alleged mastermind of the car bombings that took place at Hatay in 2013.

While Prosecutor Mehmet Selim Kiraz was killed in his office at the Istanbul Çağlayan Courthouse on Tuesday March 31 by two terrorists from the DHKP-C, the organization hit the headlines the next day, this time by attacking the Istanbul Police Headquarters with rifles, with police returning fire. One female assailant, Elif Sultan Kalsen, was killed on the spot while the other suspect was captured. Kalsen was believed to have previously conducted a suicidal attack against a police outpost in Istanbul's Sultanahmet district.

Alongside the latest events, according to reports published by Turkish media outlets in March 2013 that the organization had moved its center from Greece to Latakia, Syria, following operations that the Greek government conducted after a deal between then prime minister and current President Recep Tayyip Erdoğan and then Greek President Antonis Samaras to strengthen cooperation in the fight against terrorism.

Latakia is also known as one of the strongholds of the Syrian regime. The city's district of Ras al-Bassit has a DHKP-C militant camp protected by the Syrian army. While the military base was also assigned to a group called the Urgent Ones (Acilciler) led by Ural, known to be connected to the Assad family and a former top militant in the THKP-C, DHKP-C militants in the camp were being trained in explosives and bomb making by military officers from the Syrian army.

Concordantly to this issue, according to intelligence discussed in high-level meetings in Ankara, pro-Syrian government components that had been sentenced before were trained in Syrian prisons, and almost 1,000 of them are going to be released in the days ahead to raise havoc in Turkey before the June 7 elections. According to a report published in Sabah on March 13, "Assad will reportedly free imprisoned criminals who have been trained over the course of a year with the purpose of using them in the civil war to carry out a planned attack on Turkey."

Indeed, Ural's name also shines out for the upcoming threat by the Syrian regime and the latest deadly events of DHKP-C. On his Twitter account, Ural tweeted about Kiraz's murder on March 31, saying, "If you contaminate justice, then you'll bear the consequences."

The DHKP-C is an offshoot of a Marxist-Leninist movement that was established in the 1970s. The organization was founded in the 1990s after it splintered from a larger group of far-left organizations responsible for a string of attacks. It kept a relatively low profile for many years, but in 2013 a DHKP-C militant carried out a suicide bombing at the U.S. Embassy compound in Ankara, killing a Turkish security guard.
Last Update: Apr 04, 2015 1:54 am
RELATED TOPICS