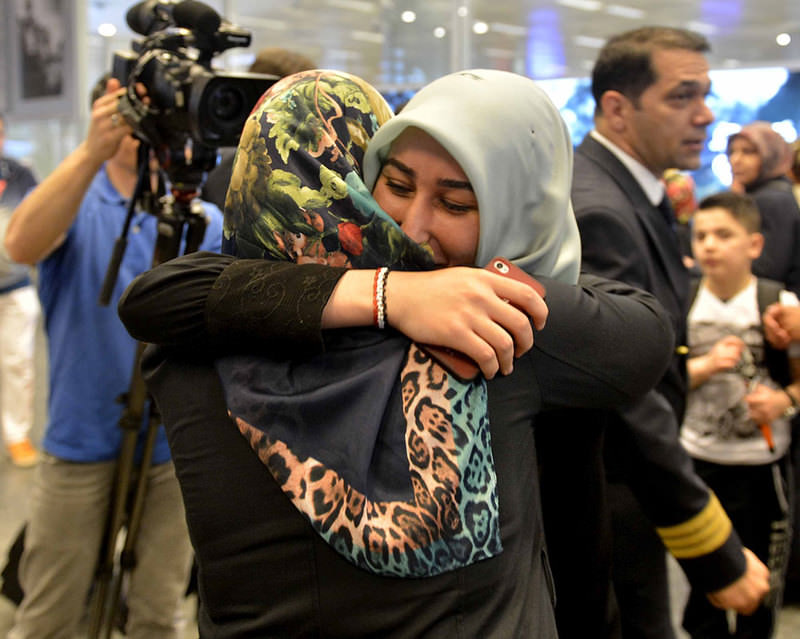 by Anadolu Agency Apr 05, 2015 12:00 am
A total of 230 people, including 185 Turkish citizens and 45 foreign nationals, have been brought to Istanbul from Yemen's capital Sana, which is gripped by an unrest that's triggered a Saudi-led military operation, authorities said Sunday.

55 Turkish citizens were evacuated earlier in the day on a Turkish Airlines flight.

The evacuated Turkish citizens talked about their sad experiences to The Anadolu Agency after arriving at Atatürk Airport, Istanbul.

Ahmet Karagöz, teacher, described how a bomb fell near his school on his first night there.

"At night, suddenly we leapt up. The windows shook, and the doors were thrown open. (Bombing) continued for four and a half hours incessantly," said Karagöz.

He said bombing continued throughout his 9-day stay in Yemen.

Ayşe Oğuz said: "We could not go out at all there. We were always at home. That's how we could be safe."

On Sunday, Foreign Minister Mevlüt Çavuşoğlu -- through Twitter messages in Turkish -- also thanked all those involved in the efforts to evacuate the Turkish citizens. Çavuşoğlu also highlighted the fact that Turkey was not only evacuating its own citizens, but also giving a hand to nationals from other countries.

"We are not only helping our own citizens, but we are also there for others who are asking for our help," he tweeted.

Previously, the Turkish naval vessel, TCG Büyükada Frigate, had evacuated 55 Turkish citizens from the Yemeni port city of Aden and later dropped them off in Djibouti.

Turkish embassy officials later escorted the 55 Turkish citizens to the airport in Djibouti Saturday from where they boarded a Turkish Airlines' flight to Istanbul and arrived in Turkey later in the evening.

Yemen has been in turmoil since September, when the Houthi militia overran the Yemeni capital of Sanaa, where they allegedly planned to extend their influence to other parts of the country.

Several Arab states have joined the Saudi-led offensive in Yemen, which began on March 25 with a string of airstrikes on Houthi militia positions.