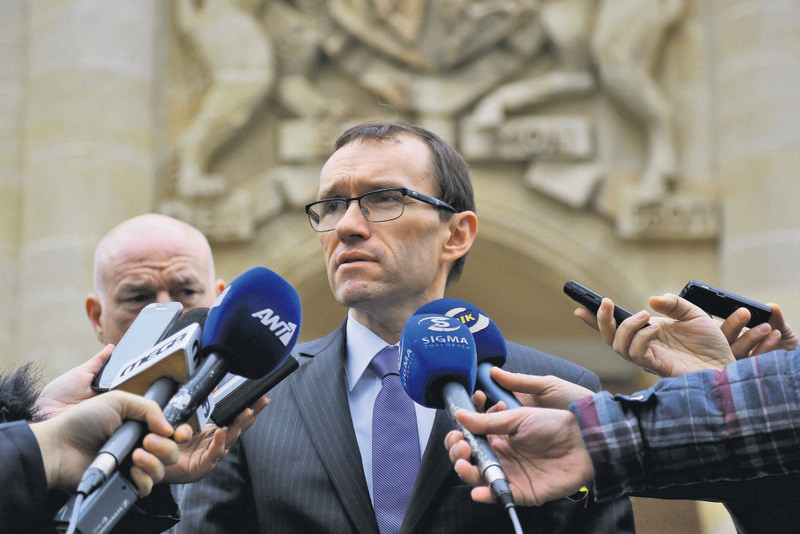 by Daily Sabah with AA Apr 07, 2015 12:00 am
U.N. Secretary-General Ban Ki-moon's special adviser on Cyprus, Espen Barth Eide, on Tuesday announced that Cyprus peace talks will resume between Greek and Turkish Cyprus in a few weeks. Eide's remarks came after a meeting with President Derviş Eroğlu of Turkish Cyprus in Nicosia. Eide said Greek Cypriot President Nicos Anastasiadis is ready to go back to the table and added that the negotiations will resume within a few weeks. "There have been 24 envoys before me, but I think I will be the last one," Eide said.

Negotiations between Greek and Turkish Cyprus had resumed after a two-year pause in February 2013 after the previous round of talks collapsed partly because of the eurozone debt crisis. A joint declaration outlining the details of a government based on federal states and reuniting the island was issued.

However, Greek Cyprus suspended the most recent talks on Oct. 7 after Turkey sent a ship to explore for oil and gas off the island's southern coast. Greek Cyprus recently withdrew its vessel searching for gas off the island in a purported attempt to resume talks with Turkish Cyprus. Turkey has reciprocated Greek Cyprus's move to withdraw its vessel that has been searching for natural resources off the Mediterranean island by sending its own hydrocarbon exploration vessel back to Turkey in a bid to resume peace talks.

It was highly expected following this development that Greek Cyprus would return to the negotiating table to resume peace talks that the two sides of the divided island pursued until Greek Cyprus's announcement that it would search for gas in the waters off the southern Cyprus. Turkish Cyprus, however, claimed the natural resources off the southern coast belong to the whole island. Since then, a Turkish vessel, the Barbaros Hayreddin Paşa, has been exploring the region for gas, which angered Greek Cyprus and led it to halt the talks.

Özdil Nami, the Turkish Cypriot foreign minister, speaking to state-run TV channel BRT, had said that the Greek Cypriot vessel was leaving the region and that they had decided to withdraw the Barbaros Hayreddin Paşa as a display of good-will in response.