Turkey's President Erdoğan: Presidential system does not equate to authoritarianism 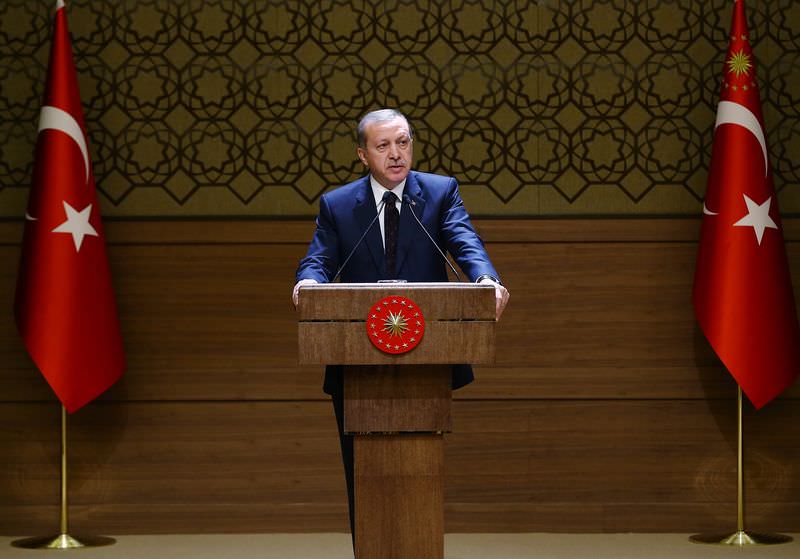 by Nurbanu Kızıl Apr 08, 2015 12:00 am
President Recep Tayyip Erdoğan underscored on Wednesday that he regards the position of presidency as a post to serve the people rather than as an opportunity to establish an authoritarian regime. He emphasized the need for a new constitution for a New Turkey and added that a presidential system was crucial to achieve Turkey's future goals.

Erdoğan addressed local chiefs at the Presidential Palace during a weekly meeting and reiterated his stance on the presidential system, while he harshly criticized those who sided with the DHKP-C terrorists who killed prosecutor Mehmet Selim Kiraz at Çağlayan Courthouse in Istanbul last week.

"As the first democratically elected president of Turkey, it is out of question for me to close the door of the presidency to the people" Erdoğan said, adding that the post of presidency exists to respond to the needs of the people and the country and highlighted once again that he is in favor of an active presidential role rather than the previous system where the president mainly played a symbolic role.

"40 years of Turkey have been wasted by coups and coalition governments" Erdoğan said, adding that Turkey needs a new system which will not allow for such crises to occur in the future.

Erdoğan also condemned media outlets which covered the terrorist attacks carried out by DHKP-C in a biased manner, almost implying support for the fatal attack which killed prosecutor Mehmet Selim Kiraz. He stated that from now on everyone who enters courthouses will be searched, including lawyers and prosecutors.

"I condemn those who sided with the terrorists" Erdoğan said, and added that those who had opened up their pages and broadcasts to the propaganda of terrorists have become partners in the murder of the prosecutor. He said that such coverage would never have occurred in Western countries as it would have been immediately stopped by legal methods, and claimed that the coverage of some Turkish outlets had exploited terrorist sentiment. He added that Turkey should also aim for Western standards in this regard as the existing system has deficiencies.

Two terrorists from the outlawed DHKP-C took Mehmet Selim Kiraz, the prosecutor of Berkin Elvan case, hostage after entering Istanbul's Çağlayan courthouse on March 31 and subsequently killed him. Some media outlets were criticized for refusing to call the perpetrators of the attack terrorists, despite the fact that the organization carries out terrorist attacks, including one in 2013 when a DHKP-C terrorist carried out a suicide bombing at the U.S. Embassy compound in Ankara.

Switching to a presidential system and bringing a new constitution are reportedly one of the main goals of the AK Party in the upcoming elections. Changing Turkey's parliamentary system has previously been brought up by numerous presidents including Turgut Özal and Süleyman Demirel and President Erdoğan specifically argues that it is more suitable to Turkey's political fabric.