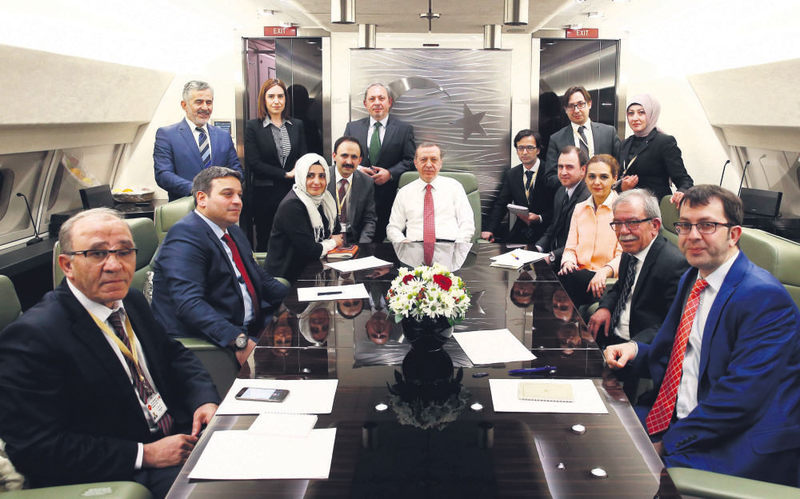 Following a warm reception by Iranian President Rouhani, President Erdoğan stressed that Turkey wants to double the trade volume with Tehran and a discount for Iranian gas. He also listed four conditions for normalizing ties with Egypt's junta regime

Equitable price in natural gas was a priority, said President Erdoğan, adding, "Everyone knows that Iranian gas is the most expensive. We buy 85 percent of the gas they export. We told them that we were their sole export market. Turkish exports amount to $4 billion, while Iranian exports to Turkey have reached $10 billion. We need to balance the trade. The matter is now in the relevant ministers' hands. They will discuss it and hopefully reach an agreement. I believe the discussions were fruitful. We also want bilateral trade to be conducted in local currencies. Iranian Central Bank officials and our Halk Bank chairman will discuss the matter."

The president said Turkish investments in Iran had reached $1.1 billion and Iranian investments in Turkey were valued at only $100 million. Erdoğan also said he believed the Iranian automobile sector could benefit significantly from Turkish expertise, and said he hoped Iran would be a huge market for automobiles produced in Turkey. "I believe there is some trouble with transferring funds due to the sanctions," he said and added that he wanted investments between the two countries to increase, but the current priorities were a natural gas discount and trade in local currencies.

When asked whether the warm reception he received in Iran would translate into a change in Iran's policy in Syria, Iraq and Yemen, which Erdoğan has criticized as sectarian, the president said: "I have to be clear here. My biggest fear is sectarianism. If we can't free ourselves from it, we will continue to face these tragedies." He cited various regional examples, such as Iraq's Shiite military retreating in Mosul and leaving all its weapons behind only for the Islamic State of Iraq and al-Sham (ISIS) to seize them, or the Shiite militias in Iraq robbing people after taking over Tikrit, which he said he had told Iranian officials. "If Sunnis did the same, my response wouldn't change. I told them my religion is not Sunnism, but Islam. But Shiism should be the religion of Shiities. Our religion is Islam."

He noted that sectarianism had cost the West a lot, and would continue to cause serious bloodshed until it was tackled in the Middle East.

He said Iranian and Turkish foreign ministers would be discussing regional issues and he said he hoped the two sides would find a way to address the chaos in the region."Turkey is against sectarian policies. One may hold a sectarian stance, but if one tries to enforce his sectarian beliefs on another, the Islamic world will divide. The Islamic world now faces such a danger. All steps taken need to address this danger," he said. Erdoğan also called on international groups, such as the Organization of Islamic Cooperation (OIC) and other relevant agencies to support such measures if they fear that the threat posed by sectarian violence will spread from Iraq, Syria, Egypt, Palestine, Libya and Yemen. Erdoğan also said that some saw such chaos caused by sectarianism as an opportunity to sell more arms.

He said he had recently met with Pakistan's Prime Minister Muhammad Nawaz Sharif and would be visiting Indonesia and Malaysia to share his views on the threat posed to the Islamic World by sectarianism.

GROUPS IN YEMEN SHOULD SIT AT THE SAME TABLE

The chaos in Yemen, where Iranian-backed Shiite Houthis are on a rampage against the Sunni government, was one of the main issues discussed during Erdoğan's visit to Tehran. "Regional countries that have an influence to shape developments are known to all. Turkey, Saudi Arabia and Iran. We want something to be done. It is important to make all relevant groups that represent the people sit at the same table so that they can discuss certain common grounds and reach a political solution. Turkey, Saudi Arabia and Iran should push for such a negotiation process. Iran and Saudi Arabia are warm toward such a deal."

He said the Saudi Arabian Crown Prince Muhammad bin Nayef was in Turkey recently and he had agreed with Turkish efforts to find a common ground between the sides in Yemen. Iranian authorities were given written and verbal briefings on Turkey's position in Yemen. The foreign ministers of the two countries would be continuing the discussions, he said.

When asked about the 2010 nuclear deal Turkey and Brazil had brokered, which was opposed by the West, and the current deal, Erdoğan said there were certain differences between the two. He said time would tell whether the current deal leads to a permanent agreement, which he noted that U.S. President Barack Obama had announced would be concluded by June 30.

He said the previous deal may have provided a foundation to the current deal, but added that Turkey supported any agreement that would lead to peace. He also noted that both Iranian President Rouhani and U.S. Secretary of State John Kerry had thanked Turkey for its help concerning the current deal.

FOUR CONDITIONS FOR NORMALIZATION WITH EGYPT

When asked about Egypt and Turkey following similar policies vis-a-vis Yemen, and whether this was a sign of improving ties between the two countries, President Erdoğan said, "I, as a politician who believes in democracy, can openly say that I cannot consent to a coup d'état. Mohammed Morsi is a president who was elected with 52 percent support."

He listed four preconditions for Turkey to normalize ties with Egypt. He said Morsi needed to be released, followed by annulling all the capital sentences given to Muslim Brotherhood supporters. Erdoğan said thousands of political opponents of the coup regime faced execution in Egypt. Thirdly, Egypt needed to release all political prisoners, which currently number close to 18,000. Lastly, all bans on political parties needed to be lifted in order to allow a normal democratic process to flourish, said Erdoğan.

"Some accuse Turkey of interfering in Egypt's domestic issues. However, in today's world, no man is an island and no country is isolated. If there is an attack on freedoms and rights in a country, we need to make our thoughts clear. You remember people commenting on Turkey during the Gezi Park incidents."

Erdoğan was asked about what he planned to do about the approaching centennial of the 1915 incidents and Armenians preparing to hold various events on April 24 to pressure Turkey. His statement last year extending his condolences to all who had lost their loved ones due to the 1915 incidents was seen as a watershed moment.

"This year's message will be given at the April 23 Peace Summit to be held in Istanbul. This summit will host around 30 heads of state and about 10 heads of government. Around 100 countries will be sending representatives. On the first day, there will be panels, and the next day everyone will go to Çanakkale to remember those who lost their lives there." Violent Armenian groups had begun to threaten countries that were sending representatives to the Peace Summit, Erdoğan said.

He said the Australian and New Zealand prime ministers would hold the dawn service there.
Last Update: Apr 09, 2015 10:47 am
RELATED TOPICS