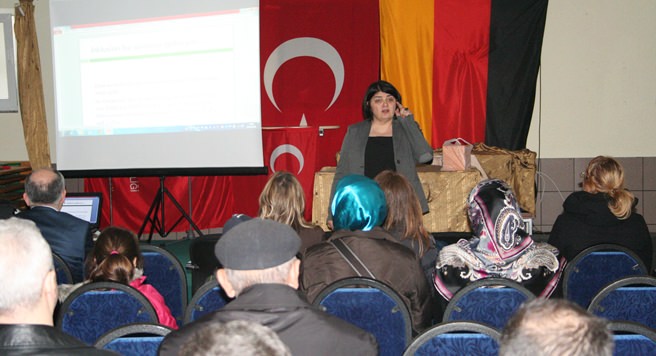 Necla Demirci | File Photo
by Fuat Uğur Apr 13, 2015 12:00 am
A man named Fatih T. works at a factory in North Rhine-Westphalia, Germany. He began by saying that they were a little late in teaching German to their son Musa: "Because Musa was a hilarious boy. He used to amuse us with his impressions. He was such a good observer that he found out the weirdest things about us and our neighbors. He made us laugh to death. His Turkish was brilliant, but his German remained weak. But we thought he would learn it anyway since he is a smart kid."

But they had misjudged the teacher factor. When the boy started school, his teacher began to humiliate him due to his poor German. The boy was a quick learner, but the teacher did not have enough patience to wait for him, which is a familiar attitude.

Think of all the xenophobia and the undercover hatred directed at immigrants.

Fatih T. went on: "After a year, that funny and smart kid turned into a lifeless boy who was growing more bad-tempered day by day."

The rest of the story is predictable. The teacher told Musa's parents that their child had a learning difficulty and understood nothing that was said in class. His parents objected, since they knew their child better than the teacher. But the teacher kept insisting, going as far as to threaten them, and eventually convinced them that it would be better both for them and Musa if they accepted the offer.

Upon this, Musa started going to a Förderschule, a type of special needs school. Now, that funny boy who amused his parents with his impressions has disappeared. He does not talk at all, only staring blankly.

But in the very same year, on August 1, 2014, the Inclusion Law entered into force in Germany, which prescribed the education of disabled and non-disabled children under the same roof.

This law created hope for thousands of Turkish children like Musa. By making use of the new law, German families started to enroll their children in normal schools. However, families of Turkish origin who are in the same situation have come across many obstacles regarding this matter.

The strange part is that in order to prevent the closing-down of Förderschules that lost their students due to the law, primary school teachers began to exert an extra effort to transfer more Turkish-origin students to those schools.

"When we look at the recent figures, we see that the number of immigrant children of Turkish origin enrolled in these schools has gone up to 70 percent in some regions of Germany."

Demirci said this increase highly depends on some facts, including that Turkish-origin families do not know the details of the German education system, they are not well informed and they are not aware of their legal rights, since they comprise the most targeted and deceived sector of society.

"I have been working as a family counselor for a long time. About 90 percent of the families were made to sign some documents by being deceived, they were lied to, and in this way their children were sent to disabled children's schools," she said.

Yaşar Karaaslan, who works as a teacher in Germany, said he talked to the parents of two of his students in order to prevent their transfer to a Förderschule, but the other teachers made the parents sign some documents that obliged them to send their children to those schools.

The story of a parent named Gürsel Yıldız clearly illustrates what teachers who still have the mindset of 1940s can do.

"My 10-year-old brother was going to Godorf Primary School located in Cologne. There was nothing wrong with my brother. So when his teachers started to indicate that they wanted to send him to a disabled children's school, we objected to that. The teachers called us every single day for three weeks to persuade us. When we did not accept it, they invited my mother, whose German is not so good, to the school and made her sign some documents. In this way they at last managed to send my brother to a disabled children's school."

Although the Green Party North Rhine-Westphalia Deputy Arif Ünal has said that the rate of Turkish children enrolled in Förderschules has declined from 13 percent to 8.5 percent based on the figures announced by the Cologne Municipality, Demirci said these figures are misleading.

"As you know, every immigrant child born in Germany has been recorded as a German citizen since 2002. When we look at the statistics we can see them recorded as German citizens. Therefore the real numbers cannot be determined by statistical data."

Demirci regards the German education system as a caste system reminiscent of medieval times. Teachers are the coordinators of this caste system. They lead the immigrant children that they could not send to disabled children schools to Hauptschules – the lower secondary education schools available after the four-year primary education. In order to enter Realschules or Gymnasiums, which offer a faster education and prepare children to enter university, one is required to be German and must have parents working at higher professional levels.