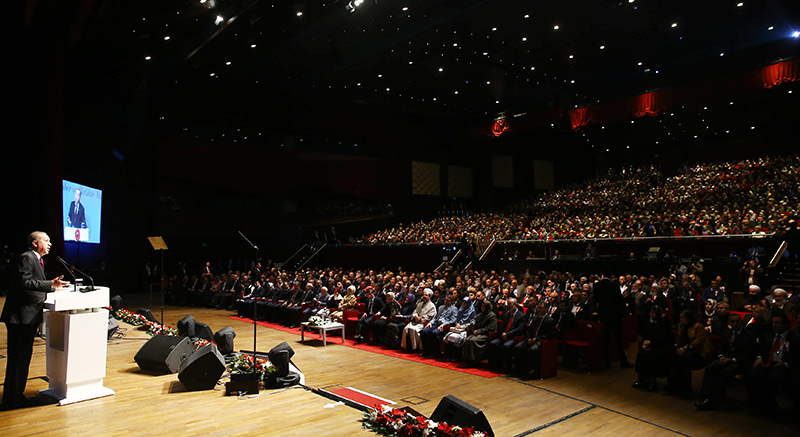 | DHA Photo
by Nurbanu Kızıl Apr 13, 2015 12:00 am
President Recep Tayyip Erdoğan on Sunday highlighted that terrorist organizations such as the self-proclaimed Islamic State of Iraq and al-Sham (ISIS) are the greatest enemy of Islam. He spoke at a program organized by the Directorate of Religious Affairs in Istanbul to celebrate the birth of Prophet Muhammad, and gave messages of unity amongst Muslims.

"The devastation caused by terrorist organizations like ISIS has reached a level surpassing that of the enemies of Islam," Erdoğan said and noted that such organizations do not serve any beneficial purpose. He added that they subject Muslims to great sufferance and create a wrong and negative perception of Islam.

Erdoğan stated that Islam encourages loving God's creation for the sake of the creator and discourages hostility based on differences. He explained that neither the Prophet Muhammad nor Muslims had ever used force and this was evident by the fact that no society had been forcibly converted to Islam. "The current picture, where Muslims are shedding each other's blood for the sake of sectarianism is a far cry from the essence of Islam" he said.

The President touched upon the dangers of sectarianism and said it is a destructive and harmful notion. "Sectarianism is currently breaking the Islamic world and the Muslim community into pieces" Erdoğan said as he referred to the ongoing crises in Iraq, Syria and Yemen, where Muslims are killing each other solely based on sectarian differences.

"We do not have a Sunni or Shia religion. We only have a single religion and that is Islam" the Turkish president noted, saying that not acknowledging this fact will result in more pain and suffering.