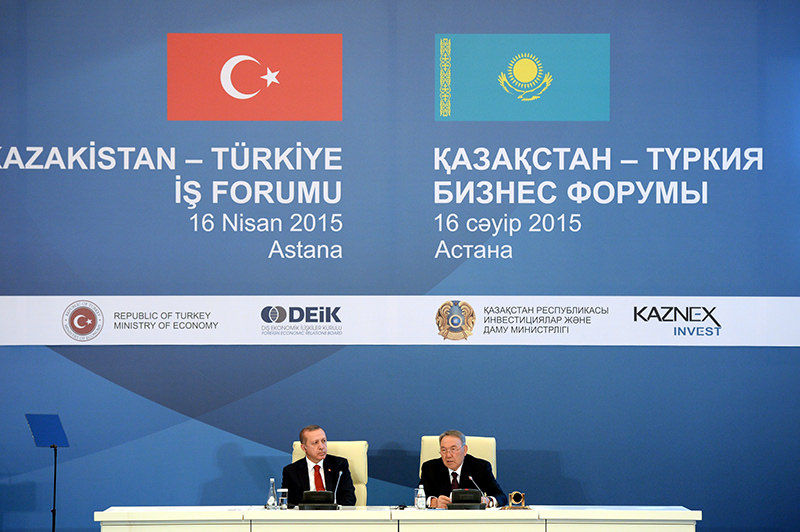 | AA Photo
by Daily Sabah with AA Apr 16, 2015 12:00 am
President Recep Tayyip Erdoğan said on Thursday that the European Parliament's Resolution on the 1915 incidents are null and void as far as Turkey is concerned. He spoke at a joint press conference held with his Kazakh counterpart in Astana and touched upon a number of issues including the recent controversy surrounding the 'genocide' claims.

"We have no problem with the Armenian people," said Erdoğan, who added that there are Armenians living in Turkey who escaped from Armenia. He called on Armenians throughout the world to forget about emnities of the past and build a common future together.

The two leaders touched upon the importance of cooperation between Turkey and Kazakhstan as they claimed it was significant to ensure stability and security of the region.

Erdoğan said: "It is a must for countries such as Turkey and Kazakhstan, symbols of stability, security and prosperity in their regions, to act together against 'the circle of fire today'."

The two leaders discussed the regional and international matters, as well as bilateral relations and progress made since the first such meeting was held in 2012, when Kazakh president paid an official visit to Turkey.

Erdoğan said: "Kazakhstan has a key location concerning the connection of Central Asia to the international markets through the Caspian Sea."

He added that any project resulting from the connection would contribute to the prosperity of the region.

Kazakh President Nazarbayev said: "Turkey wants to expand into Asia through Kazakhstan, while we want to expand into Europe and The Middle East through Turkey."

He said the two countries, which Erdoğan described as "the two great countries of Eurasia," aim to increase their trading volume to $10 billion from $3.1 billion in 2012.

Nazarbayev added: "I believe that we will soon overcome the existing regression of our trading volume.

"We are determined to take the needed steps to succeed it and to continue our efforts."

Pointing out that Kazakhstan is one of Turkey's most important political and economic partners in Central Asia, Erdogan also said there were a number of Turkish companies working across the country.

Nazarbayev said there were 1,600 Turkish companies which had carried out numerous projects worth $20 billion to date.

Erdoğan's visit, meanwhile, coincides with the 550th anniversary of Kazakh statehood, for which Turkish president congratulated the "friendly and brotherly Kazakh people".

Turkey was the first country to recognize the independence of Kazakhstan on December 16, 1991 and diplomatic relations were established in March 1992.