Presidential elections in Turkish Cyprus: Akıncı and Eroğlu proceed into the second round 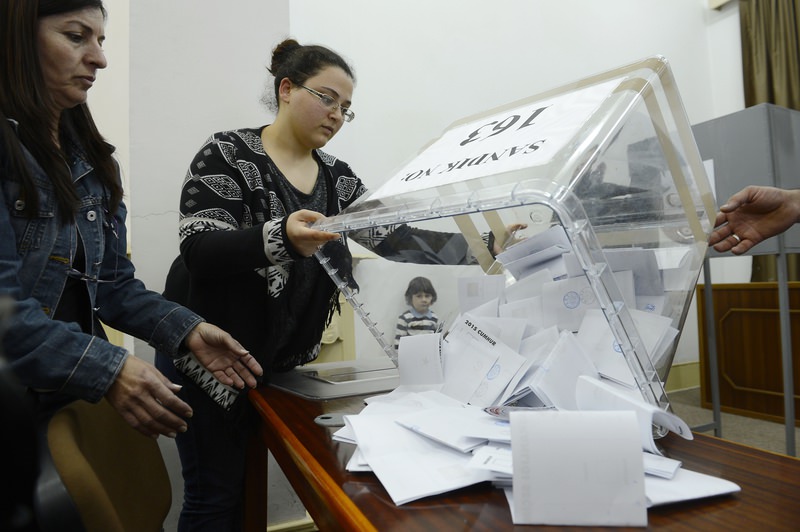 by Daily Sabah with Wires Apr 19, 2015 12:00 am
The presidential election in Turkish Republic of Northern Cyprus (TRNC) appeared set to go into a runoff on Sunday as President Derviş Eroğlu maintained only a slight lead above his closest challenger.

The key vote is taking place in the lead up to the scheduled resumption of peace talks regarding unifying the divided island next month.

Partial results showed the Eroğlu, a conservative, is ahead with 28.27 percent of the vote while Mustafa Akıncı, the former mayor of Turkish Nicosia, had 26.88 percent, according to public broadcaster Bayrak Radio Television Corporation (BRT).

Other challengers, Sibel Siber, the speaker of parliament and the Republican Turkish Party (CTP) candidate, received 22.45 percent, while Kudret Özersay, the former chief Turkish Cypriot negotiator for the settlement of the Cyprus dispute, received 21.28 percent of the vote.

A runoff, which was largely expected and is required if no candidate receives 50 percent of the vote in the first round, would take place on April 27.

Voter turnout was 62.37 percent, according to the BRT.

About 177,000 people are entitled to vote in Turkish Cyprus, which announced independence in 1983.

The next president will appoint a chief negotiator to lead the frozen U.N.-sponsored peace talks to reunify the Turkish north and the Greek south of the island.

Turkish Cypriot Foreign Minister, Özdil Nami, has said he expects the talks to resume in May. Greek Cyprus pulled out of the talks in October after Turkey said it planned to carry out exploratory missions for gas and oil off the island's southern coast.

The island has been divided since 1974, after Turkey carried out a military operation in the north, resulting in the foundation of Turkish Cyprus in response to a Greek-led coup seeking a union with Athens.