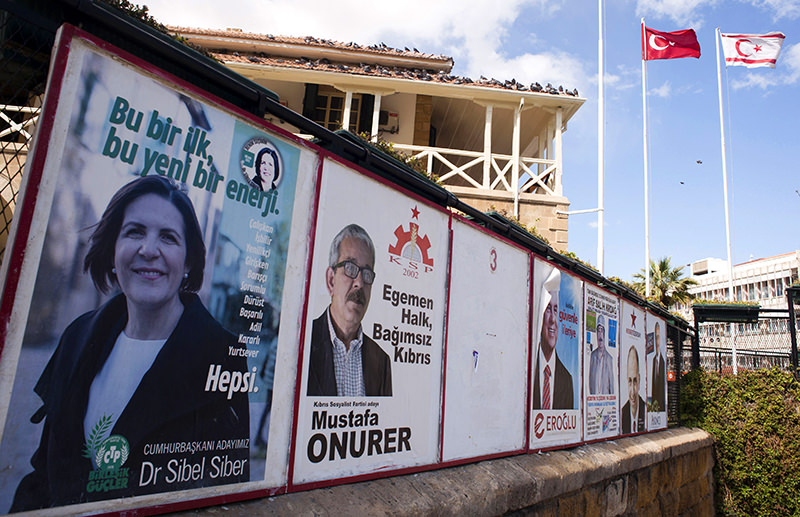 Posters bearing portraits of candidates running for the upcoming election in the Turkish Republic of Northern Cyprus (AFP Photo)
by Compiled from Wire Services Apr 19, 2015 12:00 am
Voters in the Turkish Republic of Northern Cyprus (TRNC) went to the polls on Sunday to elect a new leader whose main task will be to represent them in peace talks expected to resume on the ethnically divided island next month.

Polls opened at 8 am (0500 GMT) and were due to close at 6 pm. All campaigning stopped the previous night.

Opinion polls put conservative incumbent Derviş Eroğlu in the lead ahead of the six other candidates. But he is not expected to win enough votes in the first round, paving the way for a runoff on April 26.

Turkish Cypriots have become deeply skeptical about the prospects for reunification and so another conservative candidate, Kudret Özersay, may also do well, eroding support for Eroğlu and inadvertently helping one of the candidates more supportive of the talks, political analysts say.

"Presidential elections have always given a clear indication of the Turkish Cypriot community's view on the Cyprus problem. This time however it might be different," sociologist Kudret Akay said.

"In recent years, the Turkish Cypriots' attitude has hardened as a result of perceived Greek Cypriot intransigence in negotiations, a view most closely represented by Dervis Eroğlu."

"However Eroğlu's vote is likely to be significantly eroded by Kudret Özersay, who to some extent also represents this view," he said, adding that a more pragmatic contender may therefore make it through to the second round.

Özersay is an academic with years of experience in the stop-go reunification negotiations with the Greek Cypriots. Other leading presidential candidates include leftist Mustafa Akıncı and centrist Sibel Siber.

Almost 177,000 Turkish Cypriots are eligible to vote in Sunday's election.

Cyprus was split in 1974 when the Turkish military intervened in response to a Greek-led coup seeking a union with Athens.

Peace talks have floundered for years, but a United Nations envoy said recently said he was optimistic that the negotiations could resume soon.

The new president will appoint a chief negotiator to lead frozen UN-sponsored peace talks to reunify the Turkish north with the Greek south of the island.

Northern Cypriot Foreign Minister Özil Nami has said he expects the talks to resume in May. Cyprus pulled out of the talks in October after Turkey said it planned to explore for gas and oil off the island's southern coast.

Cyprus joined the European Union in 2004 but this only affects the southern area and the north remains dependent on Ankara.