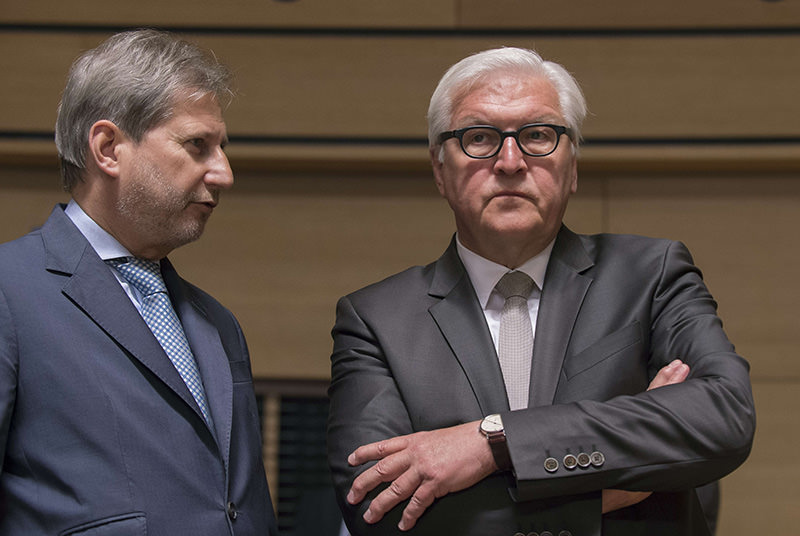 Johannes Hahn (L) and German Foreign Minister Frank-Walter Steinmeier (R) during an emergency meeting of foreign and interior ministers in Luxembourg on April 20, 2015 (AFP Photo)
by Daily Sabah with Agencies Apr 20, 2015 12:00 am
German Foreign Minister Frank Walter Steinmeier said on Friday that he avoids using the 'genocide' label to describe 1915 events regarding Armenians.

"Past atrocities cannot be reduced to a single word or to the dispute over a word," Steinmeier said during a visit to the Estonian capital Tallinn.

The European Parliament agreed a resolution urging Turkey to "recognize the Armenian genocide" on Wednesday, but the Turkish Prime Minister Ahmet Davutoğlu on Friday condemned the decision and considered it a sign of "racism" in Europe.

Controversy over the issue has risen sharply as Armenians worldwide are getting ready to commemorate the 100th anniversary next week of what they call the systematic extermination of their people by the Ottomans.

Turkey, the successor state to the Ottoman Empire, vehemently objects to the term genocide. The Turkish government last week accused European Parliament members of showing "religious and cultural fanaticism" by passing a resolution that urges Ankara to recognize the death of Armenians as genocide. Turkey says there was no organized campaign to wipe out Armenians and no evidence of any such orders from the Ottoman authorities.

Despite the recent remarks of Foreign Minister Steinmeier, a sign that there is not a consensus regarding the matter in the Parliament, the German government backed away on Monday from a steadfast refusal to use the term "genocide".

Germany had long refrained using the term "genocide" even though France and other nations have done so. But the coalition government received pressure from parliamentary deputies in their own ranks planning to use the word in a resolution. The German government is expected support a resolution in parliament on Friday declaring the 1915 events an example of genocide.