Turkish PM Davutoğlu: The past should not be exploited to create hostilities 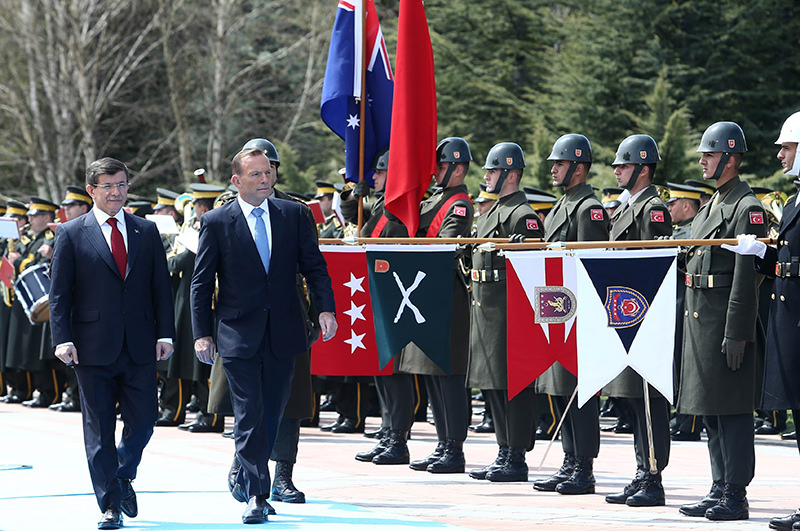 | AFP Photo
by daily sabah Apr 22, 2015 12:00 am
Prime Minister Ahmet Davutoğlu stated that everyone should learn lessons from the past rather than trying to seek revenge and create hostilities.

The Turkish Prime minister welcomed his Australian counterpart at Çankaya Palace on Wednesday, where the two leaders held a joint press conference following their meeting and touched upon a number of issues including the 1915 events, the significance of the Battle of Gallipoli, the fight against ISIS and the relations between the two countries.

"The right thing to do is to create a friendship out of the conflict between Turkey and Armenia" Davutoğlu said, emphasizing that Turkey is in favor of reconciliation with Armenia regarding the 1915 events.

Australian Prime Minister Tony Abbott stated that he was pleased to be the first official guest of Çankaya Palace, which now serves as the residence of the Prime Minister of Turkey. He highlighted the importance of relations between Turkey and Australia and stated that the two countries cooperate on numerous issues including the fight against the self-proclaimed Islamic State of Iraq and al-Sham (ISIS) and will continue to do so.

"I would like to thank Turkey on behalf of the Australian people" Abbott said, referring to the hospitality of Turkish people during the Battle of Gallipoli during World War I. "We have respect for you since that war" he said, and added that Australia appreciates the development of Turkey in the past ten years.