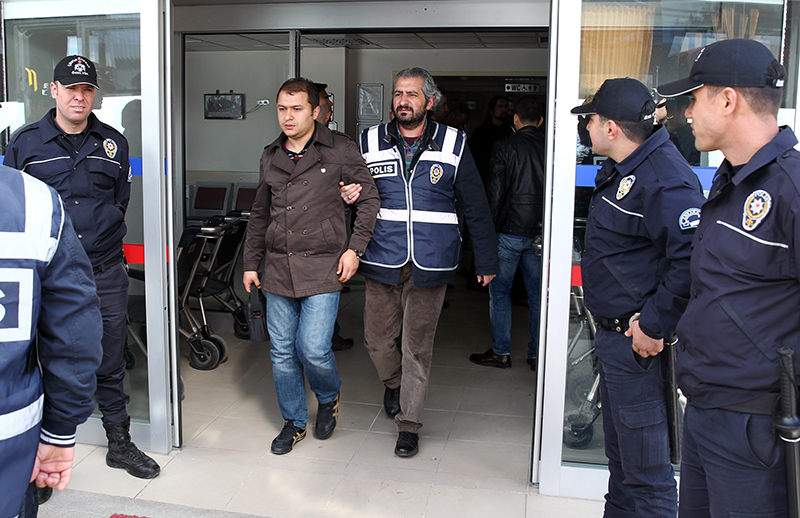 | AA Photo
by Daily Sabah with AA Apr 24, 2015 12:00 am
Early on Friday an Ankara court ordered the arrest of 17 out of 44 suspects who were already being held for alleged fraud on the 2010 nationwide Public Personnel Selection Examination (KPSS).

The court also ordered the release of two female suspects while the 25 remaining suspects were released under judicial control.

The suspects were charged with being a member of an organization formed to commit crimes, fraud at the expense of public institutions and establishments and forgery.

The public prosecutor's office in Ankara ordered the detention of 78 suspects Monday as part of a second operation into fraud allegations connected with the 2010 KPSS.

The first wave of arrests came in late March in 14 provinces, including Ankara, Istanbul and İzmir, which resulted in the detention of 62 suspects, 30 of whom were later released.

Police allegedly found evidence for the involvement of members of the Gülen Movement in the fraud.

The suspects of the first operation also faced charges of being members of a criminal organization, forgery, illegal and harmful activity in public institutions, destroying criminal evidence and abuse of power.

Police units launched the second wave of the KPSS cheating investigation in 28 provinces acr and took 35 of 78 suspects into custody on Monday morning. Nine other suspects were taken into custody a day later and the whereabouts of 33 others is reportedly unknown.

After a Gülen Movement-linked Twitter account named @FuatAvni released details of the pre-dawn raids on Sunday night, many of the suspects reportedly left their homes with some leaving the country in order to escape arrest. Similar tipoffs were announced by anonymous Gülen Movement-affiliated Twitter accounts, hinting at the movement's deep infiltration in state institutions, mainly the judiciary, police department and the media.

The operation was launched jointly by the Ankara Police Department's Anti-Smuggling and Organized Crime Bureau and Financial Crime Bureau, and was put into action to investigate the purported Gülen Movement-linked suspects' alleged involvement in mass cheating on the 2010 KPSS, for which Fethullah Gülen is the prime suspect. In the first wave of the operation, 32 out of 62 Gülen Movement-linked suspects were arrested on March 27.

Members of the Gülen Movement have allegedly infiltrated state institutions with a supposed aim of bringing down the elected government and taking over the state. The network is run by Fetullah Gülen who lives in self-imposed exile in Pennsylvania.