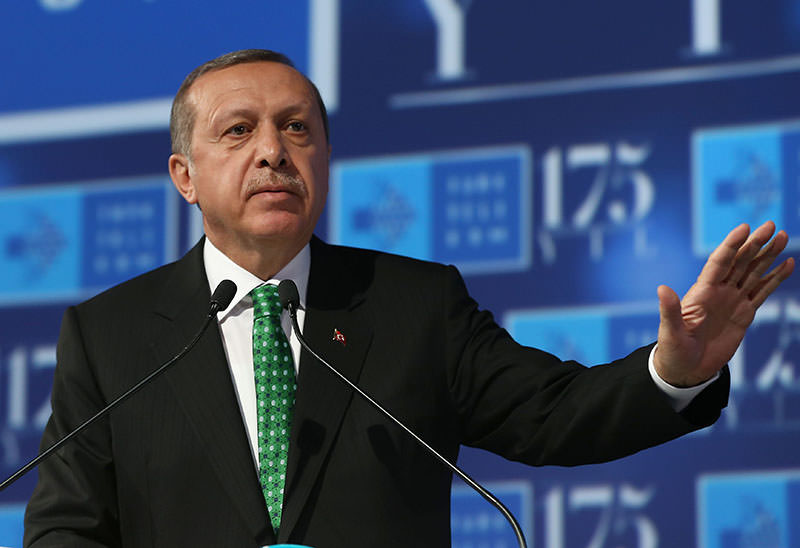 | IHA Photo
by daily sabah Apr 24, 2015 12:00 am
President Recep Tayyip Erdoğan said Turkey shares Armenian's pain with sincerity and understands them, at his commemoration message read at Istanbul Armenian Patriarchate, during a ceremony which marked the death of Ottoman Armenians in 1915.

In his message President Erdoğan said that Turkey knows about the saddening events which Armenian society has gone through, stating, "The doors of our hearts are open to the deceased Ottoman Armenians' grandchildren."

Armenian society has made valuable economical, culture, and political contributions to the Ottoman Empire and the Republic of Turkey, Erdoğan said in his message, and emphasized that Turkey now pays tribute to them.

Erdoğan's message was read to the community by Father Tatul Anuşyan, board member of the Spiritual Committee of the Armenian Patriarchate, during the ceremony conducted on Friday. Turkey's Minister of European Affairs Volkan Bozkır attended the ceremony, which was a first in Turkish Republic's history owing to the attendance of a Turkish government representative (at an official level) in the commemoration liturgy.

Patriarchate officials welcomed the presence of a minister at the ceremony. "It is quite promising and pleasing. I think it is a symbol of the positive steps that have been taken so far," reportely said Tatul Anuşyan.

President Erdoğan further said in his commemoration message, "During World War I, which is one of the greatest tragedies of humanity, millions of people from every nation living in the Ottoman Empire's borders, died."

"We succeeded in establishing the Republic of Turkey, without forgetting these pains but also knowing how to cope with them. And today, we all work, and strive to reach better days in terms of harmony, peace and brotherhood, without discriminating based on ethnic or religious identity."

President Erdoğan hosted leaders of the World War I Allies (17 Presidents and 5 Prime Ministers) on Gallipoli Peninsula in western Turkey on Friday, to commemorate the centenary of one of the deadliest battles during World War I, and sent out a message of reconciliation.

The leaders attended ceremonies throughout the day at the beaches where the Allied and Ottoman troops met from 1915 to 1916, which left more than 130,000 casualties on both sides.