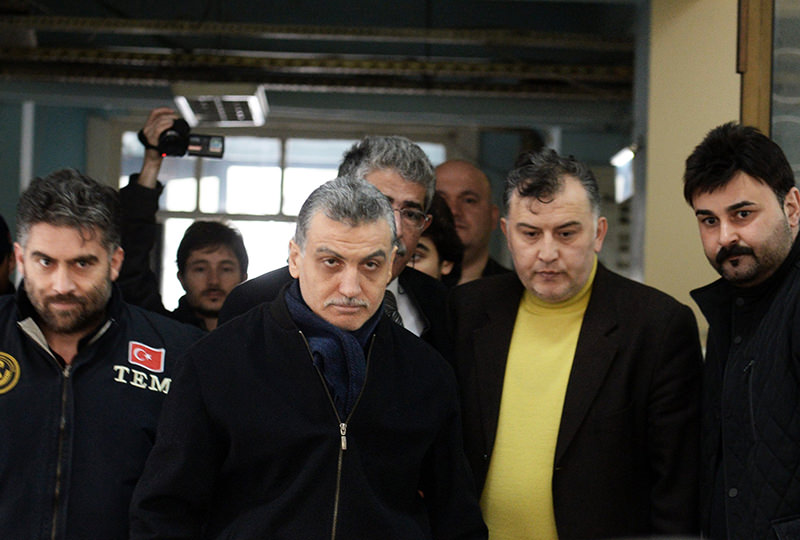 An unauthorized court ruled on Saturday to release the Gülenist suspects, although the court authorized to make such decisions ruled for the continued detention of the suspects. The incident prompted an investigation by the Supreme Board of Judges and Prosecutors and raised questions over whether the judges have any affiliation with the Gülen Movement

The Istanbul 10th Criminal Court of Peace has ruled for the continued detention of Gülen Movement-affiliated Samanyolu Broadcasting Group General Manager Hidayet Karaca and 75 others, including police officers linked to the group, detainees after deciding that the ruling handed down by the 32th Criminal Court of First Instance to release the suspects was invalid.

The suspects, who are accused of being Gülenist operatives, are currently facing charges of various offenses ranging from carrying out illegal wiretapping activities to spying. The 32nd Criminal Court of First Instance responded to the demands of the suspects' lawyers by asking for their release in a decision that was deemed void by the Istanbul 10th Criminal Court of Peace. The suspects will remain jailed pending trial, but the unauthorized decision of the court raised some eyebrows as to whether members of the Gülen Movement, which is accused of infiltrating key state institutions, are still existent in the judiciary. Prime Minister Ahmet Davutoğlu branded the attempt as a coup in the judiciary and claimed on Sunday that the judges acted up an order: "They attempted a coup in the judiciary [on Saturday]. They received an order a week ago from Pennsylvania [where Fethullah Gülen lives in exile]. We have records; an order demanding their release from prison." The Supreme Board of Judges and Prosecutors (HSYK) launched an investigation into the judges who exceeded their authority and ruled the release of the suspects and is scheduled to hold a meeting to assess the incident on Monday.

Despite being unauthorized on warrants for discharge, the judge of the Istanbul 29th Penal Court of First Instance, Metin Özçelik, accepted the demands of the suspects' lawyers for pre-trial release and sent the petitions to another judge, Mustafa Başer. A judge in the Istanbul 32nd Criminal Court of First Instance, Başer, attempted to release the suspects.

Judges Özçelik and Başer previously looked into the cases at specially authorized courts before they were abolished. The courts in question were allegedly controlled by judges who were members of the Gülen Movement and heard some critical cases such as the alleged coup plot attempt by members of the army and the trial of Armenian journalist Hrant Dink who was murdered in 2007.

Upon Başer's decision to release the suspects, the Istanbul Chief Public Prosecutor's counter-terrorism and organized crimes unit demanded cancelation of the warrant, which was reportedly issued outside the National Judicial Network Project (UYAP), which allows institutions to immediately see court rulings and detention and arrest warrants, and asked for the continuation of the suspects' detention.

The Istanbul 10th Criminal Court of Peace, appraising the demand, stressed that it is not possible according to the code of law for high criminal courts and courts of first instance to assess requests for release of suspects who are held in pre-trial detention. Taking this into consideration, the Istanbul 10th Criminal Court of Peace decided that the ruling of the 32nd Penal Court of First Instance was invalid and inapplicable. The decision cited the lack of authority of the court to rule on the release of the suspects. The court rejected the separate demands of the suspects and ruled for the continuation of their imprisonment.

Following the unlawful decision, an authorized court and the Chief Prosecutor's Office declared the decision null and void. Former Chief Prosecutor Reşat Petek claimed the incident to be a coup attempt through judicial means and said it was impossible for members of the judiciary not to know the scope of their authority. He said there is an intention to engender a perception that the law is being obstructed.

"It is a coup attempt by means of judicial power, as the situation cannot be explained in another way. According to the 7th article of the Law of Criminal Procedure, it is clear that unauthorized decisions are null and void. Therefore, it is the correct decision to extend the detention on remand," Petek said.

"Some media outlets perseveringly try to create a sense that judicial decisions are not honored, but it is a completely unlawful and arbitrary decision made by disregarding duties and authorities," Petek added.

The unlawful decision also stirred harsh reactions from the public, which believes the judicial members associated with the Gülen Movement should urgently be removed from their positions.

Karaca and police officers were detained on December 14 as part of an investigation, referred to as the Tahşiye case, into alleged illegal activities by the Gülen Movement, led by the U.S.-based imam Fethullah Gülen. Other police officers allegedly linked with the movement were detained in operations into illegal wiretapping activities. Some are accused of forming a criminal organization to commit crimes.

Members of the movement, so-called Gülenists, are suspected of perpetrating criminal activities through their operatives within the state, especially the judiciary, police and the media. The December 14 operation was the result of complaints filed against the Gülen Movement by several individuals from the Tahşiye group, which was allegedly victimized by the movement.