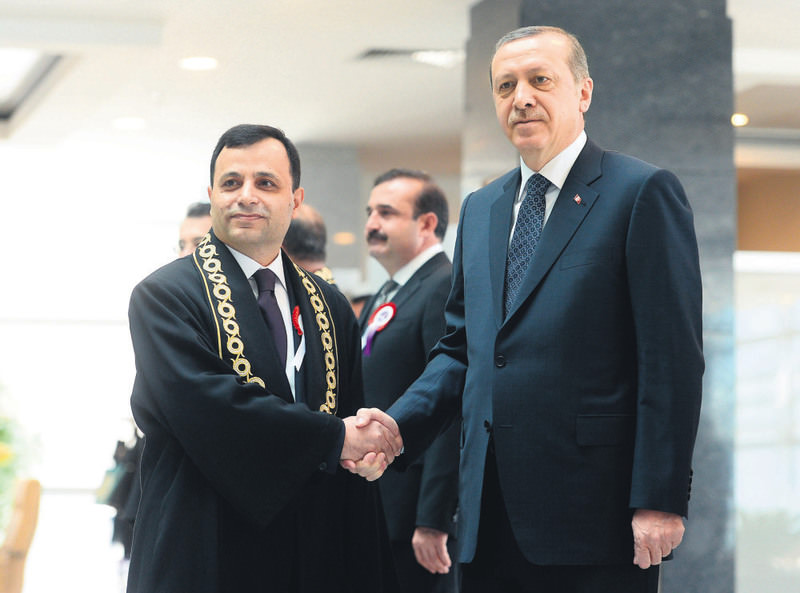 by Sena Alkan Apr 27, 2015 12:00 am
The newly appointed president of Turkey's Constitutional Court, Zühtü Arslan, said on Monday at an event to celebrate the 53rd foundation anniversary of the top court that the country is in need of a new constitution. "What is needed now is to see an effective will by all actors in the process of establishing a new constitution," Arslan said, adding that dialogue and compromise must be at the forefront during the process, instead of polarizing and devastating attitudes.

The current Constitution was drafted in 1982 after the 1980 military coup. Despite numerous revisions over the last 33 years, according to constitutional experts, it still bears the stamp of military tutelage. A new constitution is one of the key elements of the AK Party's platform for the upcoming general elections.

Prime Minister Ahmet Davutoğlu described this goal: "We will open the way for a brand new political system with a new constitution."

Touching on a new constitution that the ruling Justice and Development Party (AK Party) aims to establish after the upcoming June 7 general election, Arslan said: "Considering our country's current economic and political level of development, a new constitution is inevitably necessary."

He said that to create a suitable atmosphere for a new constitution around the country is the common responsibility of both civil and political figures as all segments of society should be included in the process.

Arslan further urged that establishing a new constitution by disregarding the essential features of democratic constitutions such as the separation of powers, superiority of law, human rights and pluralism is as wrong as making a constitution with the copy and paste method. He added that a constitution is not enough to solve a problem on its own.

Arslan also stated that those whose minds and consciences are not free cannot be judges and those who allow others to control their minds cannot perform the duties of a judge.

"No remote control justice or justice can be thought of as the rule of law," he said in reference to alleged judges and prosecutors who are believed to be under the sway of U.S.-based former imam Fethullah Gülen, the head of the Gülen Movement, which allegedly tried to topple the government.

The alleged influence of the movement in the judiciary came under the spotlight over the weekend when it has been claimed that Gülen ordered an unauthorized judge to release Gülen Movement-affiliated Samanyolu Broadcasting Group General Manager Hidayet Karaca and 75 other detainees, which turned out to be unlawful.

During his speech, Arslan also thanked retired members and former top judge Haşim Kılıç, who came under the spotlight during his post with his disputes with the President Recep Tayyip Erdoğan during his tenure as prime minister. He was accused of making politically-motivated remarks.

The Constitutional Court elected Arslan as its new chairman in February after he received 11 of the 17 votes.
Last Update: Apr 28, 2015 10:34 am
RELATED TOPICS