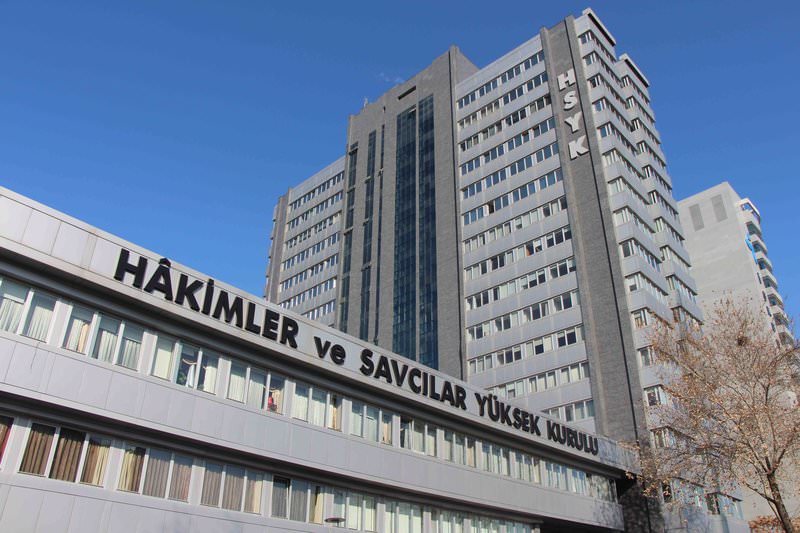 The Supreme Board of Judges and Prosecutors has decided to suspend two judges from duty after they delivered unauthorized rulings regarding suspects allegedly affiliated with the Gülen Movement. The two judges attempted to release the suspects although they lacked the authority, in a move that has cast doubts on their impartiality

The Supreme Board of Judges and Prosecutors (HSYK) convened on Monday to appraise the controversial rulings delivered by the judges from the 29th and 32nd Criminal Court of First Instance on Saturday regarding Gülen Movement-affiliated Samanyolu Broadcasting Group General Manager Hidayet Karaca and 75 other detainees.

The two judges attempted to release the suspects although they were not authorized to hand down such a decision. The 29th Court of First Instance ruled for the discharge of the judge who oversaw the case and referred it to 32nd Court of First Instance in what looked like choosing the judge at its own will, which later ruled for the pre-trial release of the suspects. However, the 10th Criminal Court of Peace, citing the lack of authority of the court to rule on the release of suspects, deemed the 32nd Court of First Instance's ruling void and decided that the detention of the suspects continue. The incident has prompted an investigation by the HSYK, and according to a preliminary report, inspectors reportedly decided to suspend the judges from duty during their special session on Monday as a precaution.

Meanwhile, the 32th Criminal Court of First Instance sent the file of the suspects that contained the court's decision to release the suspects to the prosecutors' office again on Monday demanding that the decision be enforced.

"The decision to release the suspects delivered by our court is in accordance with laws, cannot be subjected to an objection and requires immediate execution. Another 10th Criminal Court of Peace's assessing our ruling and deeming it void is not in line with the judicial process," the statement read.

The incident, which has triggered hot debate among judiciary members and experts, began when Özçelik ruled for the discharge of the judge who looked into the case and handed it over to the 32th Criminal Court of First Instance, which ruled for the release of the suspects in question, although such a decision was beyond its authority. The prosecutor's office that received the court ruling did not put it into force since, according to the code of law, a case whose investigation is ongoing can only be assessed by the Criminal Court of Peace. In that respect, the 10th Criminal Court of Peace decided that the decision to release the suspects was inapplicable and invalid for having been delivered by an unauthorized court.

The suspects will remain imprisoned pending trial, but the unauthorized decision of the court raised some eyebrows as to whether members of the Gülen Movement, which is accused of infiltrating key state institutions, are still existent in the judiciary.

The head of the constitutional court, Zühtü Arslan, on Monday focused on the independence of the judiciary and said the members of the body should use their minds and will without receiving orders or requests from certain groups or people.

Former Chief Prosecutor Reşat Petek also claimed the incident was a coup attempt through judicial means and said it was impossible for members of the judiciary not to know their authority. He said there is an intention to engender a perception that law is being obstructed.

Karaca and police officers were detained on December 14 as part of an investigation, referred to as the Tahşiye case, into alleged illegal activities by the Gülen Movement, led by the U.S.-based imam Fethullah Gülen. Other police officers allegedly linked with the movement were detained in operations into illegal wiretapping activities. Some are accused of forming a criminal organization to commit crimes.

Members of the movement, so-called Gülenists, are suspected of perpetrating criminal activities through their operatives within the state, especially the judiciary, police and the media.
Last Update: Apr 27, 2015 8:13 pm
RELATED TOPICS