Assad cannot be part of Syria’s future, stresses US envoy Bass to Turkey 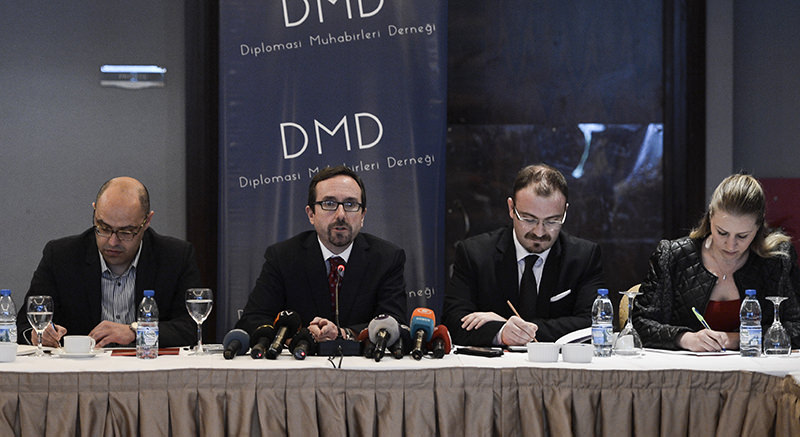 U.S. Ambassador John Bass praised Ankara’s efforts to stem the flow of foreign fighters to Syria and added that there is no place for President Assad in Syria’s future

U.S. Ambassador to Turkey John Bass said NATO allies Turkey and the U.S. share similar views on their Iraq and Syria policies, adding that Bashar Assad lost his legitimacy long ago and he cannot have a part in Syria's future.

Speaking at a press meeting held by the Ankara Diplomacy Correspondents Association in Ankara on Monday, Bass stressed that Assad has to leave his post for negotiations on the transformation of power in the war-torn country to start. The U.S. envoy also said that they are having security-related talks with Turkish officials, not only on Syria, but on the Islamic State of Iraq and al-Sham (ISIS) threat and peace efforts in Libya.
Commenting on foreign fighters, who cross Turkish soil to join ISIS in Syria, Bass praised Turkey's efforts but added that tight border security will not completely solve fighters joining ISIS and called on other countries to do more to stop their citizens joining the militant group.

Turkish officials, who have requested further support from the West at every opportunity, are counting on more solid steps to stem the flow of foreign fighters. Foreign Minister Mevlüt Çavuşoğlu had previously said one of the main problems in stopping the flow of fighters is that individuals who are deported from Turkey keep returning, and highlighted the refusal of some countries to take the issue seriously. As part of Turkey's efforts, the police force has tightened security at transfer points such as airports, terminals, bus stations and car rental companies via a special risk analysis system, and a team tasked with tracking suspicious foreigners who travel to Turkey for the first time and those who are minors and do not have a hotel reservation. So far, Turkey has deported over 1,200 people before they could join the terrorist group in neighboring Syria. Turkey has also issued exclusion bans on 12,519 suspected individuals to date, demonstrating its success in blocking the passage of potential fighters heading to join ISIS via Turkey.

The U.S. envoy drew attention to the importance of supporting moderate Syrian opposition in the fight against ISIS and reminded that Turkey and the U.S. have recently signed an agreement to start a train-and-equip program for Syrians to defend themselves against ISIS and regime threats.

The train-and-equip program for moderate Syrian opposition forces is scheduled to begin on Saturday, Çavuşoğlu told Daily Sabah. Due to the time taken to form fighting units as well as transportation of weaponry, the program will commence three months after the signing of the agreement in February. "There isn't any political or other issue. At first, 300 people will be trained, followed by the next 300. By the end of the year the number of trained and equipped fighters will reach 2,000," Çavuşoğlu said. He further added that the U.S. and Turkey share the view of a Syria without President Bashar Assad. "But for now, the fight is a priority for the U.S.," the foreign minister said, adding that the trained-and-equipped Syrian opposition groups will fight both the Assad regime and ISIS.

The U.S. Senate confirmed John Bass as the ambassador to Ankara in September 2014. Ambassador Bass represented President Barack Obama in the Gallipoli commemorations to mark the centenary of the battles.

Bass previously served as ambassador to Georgia from 2009 to 2012 and the executive secretary of state.

Asked about Gülen, Bass says extradition requests will be transparent

Answering a question regarding U.S.-based imam Fethullah Gülen's extradition, U.S. Ambassador John Bass said the U.S. government cannot comment on the extradition process, but noted that the procedures will be transparently conducted under a legal framework.

Turkey has taken steps to label the Gülen Movement as a threat to national security and is seeking Fethullah Gülen's extradition from the U.S. based on mutual extradition agreements. It was reported that sufficient concrete evidence has been found proving Gülen's involvement in leading a criminal organization and crimes including forgery, fabricating evidence and forming an alleged crime syndicate to undermine the sovereignty of the state.

Furthermore, Public Prosecutor Yücel Erkman, who looked into the cheating allegations in the Public Personnel Selection Exam (KPSS) held in 2010, claimed in his indictment that Gülen is a primary suspect of the alleged offense. The probe was merged with the illegal wiretapping case, in which Gülen is the prime suspect. There is also another lawsuit against Gülen as part of the Tahşiye case in which he is charged with forming a terrorist organization to demonize a rival religious group.

In regards to Turkey's reconciliation process, which aims to end the decades-long conflict with the PKK, U.S. Ambassador John Bass said the U.S. strongly supports the process and a conflict with the PKK would be the last thing anyone would want in a region that is hit by wars.

In remarks made to the media during his visit to the predominantly Kurdish province of Diyarbakır in March, Bass urged the PKK to lay down arms and give peace a chance. His comments came a week after the imprisoned PKK leader Abdullah Öcalan was quoted as calling on his followers to hold a congress to decide whether the banned organization should let go of its militant path and lay down its arms to end its more than 30-year conflict with the Turkish state.

The U.S. envoy said if the PKK dropped its weapons, "It will contribute to peace in the area and the United States is ready to support the peace process." He added that the reconciliation process would contribute to positive development in places like Diyarbakır.