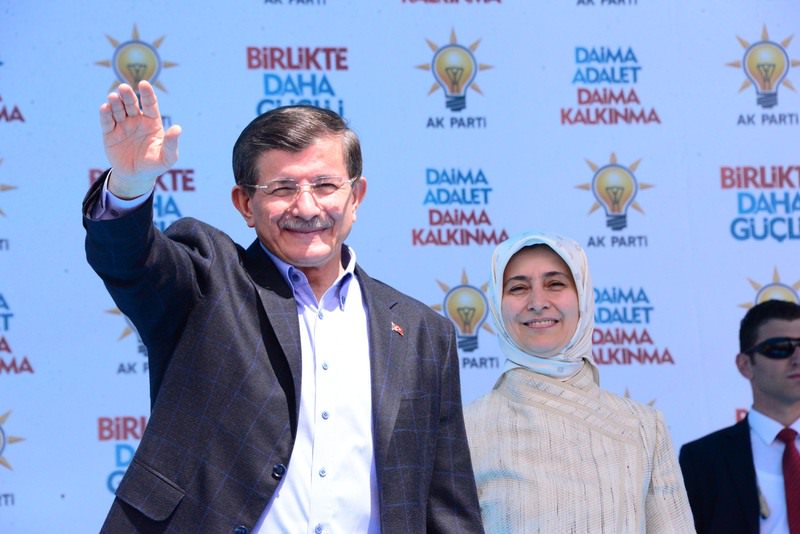 In an election rally in the eastern province of Ardahan, Prime Minister Davutoğlu questioned the main opposition CHP pledge to bring peace to the Middle East and criticized it for promising to send ‘oppressed' Syrian refugees back to their war-torn country

Prime Minister Ahmet Davutoğlu, addressing a crowd in northernmost province of Ardahan on Tuesday, criticized the main opposition Republican People's Party's (CHP) election promise of returning the nearly 2 million Syrians who have found shelter in Turkey. "Are we going to do that? We will look after them. CHP Chairman Kemal] Kılıçdaroğlu pledged to bring peace to the Middle East. First, bring some peace to your own party," Davutoğlu added, referring to the internal dispute within the CHP.

Referring to the 1944 Boraltan Bridge Massacre, Davutoğlu said President İsmet İnönü, who was the national chief and "unchangeable chairman of the CHP," ordered to hand over 146 Azerbaijanis escaping Stalinist persecution to the Soviet Union.

Meanwhile, during his visit to Turkey eastern province of Iğdır on Tuesday, Davutoğlu criticized remarks made by Kılıçdaroğlu, and said: "If it was up to Kılıçdaroğlu, he would hand our brothers from Kobani in to the hands of the self-proclaimed Islamic State in Iraq and al-Sham (ISIS), this is his mentality."

The Boraltan Bridge incident is portrayed as a black mark for the Turkish government as 146 Azerbaijanis had sought refuge at the Boraltan border posts located in Turkey in 1944 to escape Stalinist persecution. The commander at the border post informed Ankara about the situation, but was told to send the Azerbaijanis back. After sending the first batch of Azerbaijanis and watching them be shot to death on the Boraltan Bridge by Soviet guards the commander notified Ankara once again about the situation, but the reply was the same and all the Azerbaijanis were killed. The incident went down in Turkish history with the last words of one of those who were killed to a Turkish soldier standing across the border: "I wish, my brother, you had killed me instead of them."

In a rally he held in the central Anatolian province of Kayseri on May 3, Kılıçdaroğlu repeated his election promise to send Syrian refugees back if the CHP gains power in the June 7 general elections. "We will bring peace to the Middle East, and then we will send the 2 million Syrian brothers and sisters back to their country," Kılıçdaroğlu said.

Even though Turkish people have opened their doors and shared their food with war weary Syrian refugees as a result of traditional hospitality, some complain of the high number of refugees since those who fled Syria make things difficult for locals. Financially speaking, poor Syrian refugees will work for low wages and wealthy Syrians who rent houses, shops create even more problems for Turkish citizens. Locals who live where there are high concentrations of Syrian refugees say that wealthy Syrian refugees undermine Turkish businesses and increase living costs by offering higher rents for homes and shops and displace locals while other refugees beg and steal.

Leaning on those problems, Kılıçdaroğlu pledged to send Syrian refugees back to their home country. According to a 2014 report by the United Nations Relief and Works Agency (UNRWA), the Syrian economy will take nearly 30 years to return the economic level of 2010 due to the devastation that equals that of World War II.

Davutoğlu mentioned the Justice and Development Party's (AK Party) investment in Ardahan as he said that five faculties, three institutes, three vocational schools, 62 two-lane roads and an organized industrial area have been established during the AK Party's term in the province. He further promised to introduce Ardahan as a gate to the Caucasus.
Last Update: May 06, 2015 10:37 am
RELATED TOPICS