Turkey sent four trucks of arms to us in Kobani, peshmerga commander says 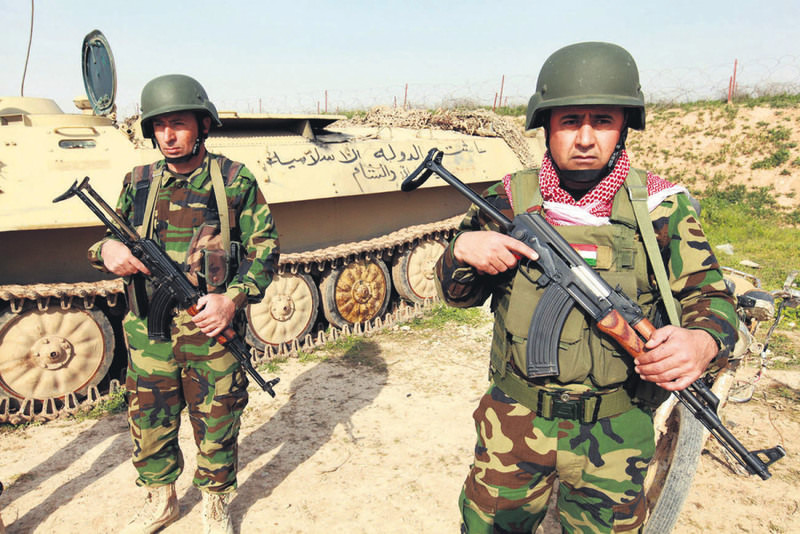 Northern Iraq's Kurdistan Regional Government (KRG) peshmerga forces who were fighting the Islamic State of Iraq and al-Sham (ISIS) in the Syrian town Kobani returned to the KRG capital Irbil last week after Kobani was freed from the terrorist organization. Commenting on their struggle in Kobani to the Rudaw news portal, a peshmerga commander, Muslih Zebari, said Turkey supplied ammunition and supported them during their fight against ISIS.

"In Kobani, Turkey provided our daily food and, apart from that, they also provided four trucks of ammunition, which cost $630,000," Zebari said on Monday. ISIS besieged Kobani last September and in order to help the Kurdish ground forces defending the city, the Turkish government allowed 150 peshmerga fighters from the KRG in northern Iraq to pass through Turkey to join the fight against ISIS in Kobani in October last year.

In addition, Turkish officials said Turkey is also providing political, military and humanitarian support to the KRG region. Foreign Minister Mevlüt Çavuşoğlu said last week that Turkey is carrying out a train-and-equip program for the KRG as well as Mosul national guard units. KRG Prime Minister Nechirvan Barzani also recently praised Turkey's role in providing support in the fight to drive ISIS out of Kobani. Due to ISIS, thousands of innocent civilians have been forced to flee to Turkey from Kobani while 200,000 Kobani residents rapidly fled to Turkey's neighboring town of Suruç in Şanlıurfa province in one week in early October of last year. Additionally, last January Turkey opened its biggest refugee camp to house 35,000 people fleeing Kobani.

Kobani was liberated from ISIS in January and four months afterward, most of the 200,000 refugees who fled to Turkey are reluctant to return to a wasteland of collapsed buildings and are at a loss as to how and where to rebuild their lives.

The last group of Kurdish peshmerga forces fighting ISIS in the Syrian city of Kobani left last week after their two-month mission ended. The group of 124 peshmerga, the fourth batch sent by the northern Iraqi Kurdish administration since October last year, arrived in the southeastern Turkish province of Şanlıurfa last week Tuesday, and their plane took off for Iraq early Wednesday morning. Northern Iraqi officials have said no more troops will be sent.

A spokesman for the Iraqi Kurdish northern region's government expressed his gratitude on Wednesday to Turkey for allowing peshmerga forces to pass through its land. "Turkey allowed the peshmerga to pass to Syria to save Kobani. That is why I want to thank Turkey. Turkey's role is very valuable in that regard. We managed to protect Kobani from ISIS because of Turkey's historical decision," Sefin Dizayi said.

After ISIS launched an offensive in September 2014 to capture Kobani - located only hundreds of meters away from the Turkish border - a group of 150 Iraqi Kurdish peshmerga arrived in Şanlıurfa on October 28, 2014, to join fighters battling the extremist rebel group. A second Peshmerga battalion reached the battle after traveling through Turkey on December 3, 2014. A third group arrived in Kobani on January 16, 2015, from the capital of the Iraqi Kurdish regional administration, Irbil, via the Suruç district of Şanlıurfa.

Kurdistan Regional Government (KRG) Prime Minister Nechirvan Barzani has recently praised Turkey's role in providing support in the fight to drive ISIS out of Kobani, Syria. Although Turkey has been exerting considerable effort to contribute to the U.S.-led coalition, which was established to wipe out ISIS in Syria and Iraq, some Western media outlets, along with those close to opposition parties in Turkey, have been propagating the view that Turkey is sidelining itself in the fight against ISIS and creating the perception that it is not actively involved in the coalition. Barzani attempted to refute these claims in a new interview.

A Turkish daily recently published an interview with Barzani from the perspective that Turkey has not been taking an active role in the coalition. However, despite the questions of the reporter conducting the interview, Barzani said that Turkey has exerted major efforts against the ISIS threat. Barzani said that President Recep Tayyip Erdoğan and Prime Minister Ahmet Davutoğlu hold a major share in the liberation of Kobani, a strategic Kurdish-Syrian town that was previously besieged by ISIS militants.

"They sent us trucks of bullets and howitzers at the onset of the fighting, followed by a delivery of military clothes and other things," Barzani said, adding that Turkey also provided major support in the matter of taking in refugees. He also said that Turkey has provided financial assistance to the KRG, which he said was $500 million last year.

"Another [$500 million] is on the way," Barzani said. He continued by praising Turkey's assistance: "The biggest and most apparent gesture from the Turkish government has been its facilitation of the passage of peshmerga forces through its territory."

Ankara ensured secure and problem-free access to Kobani in the face of criticism during the battle for Kobani. Barzani said: "The efforts of Turkey cannot be disregarded. If Kobani was rescued, the Turkish president and prime minister have definitely played their part."
Last Update: May 06, 2015 10:43 am
RELATED TOPICS