2015 can be year of peace in Cyprus if Greek side puts effort: President Erdoğan 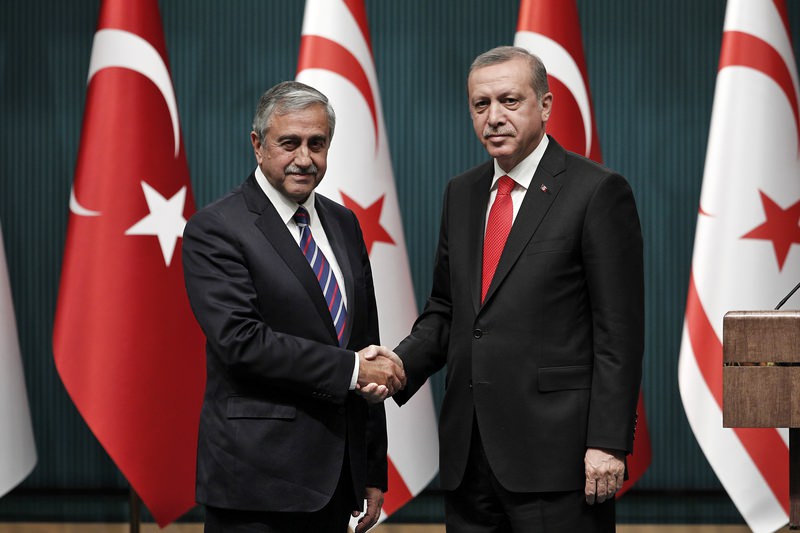 by Daily Sabah May 06, 2015 12:00 am
President Erdoğan said on Wednesday that a permanent solution in Cyprus will be beneficial not only for the island but also for the international community, especially the EU.

Speaking in a joint press conference with the newly-elected President of the Turkish Republic of Northern Cyprus Mustafa Akıncı, Erdoğan said that in order to resolve the Cyprus dispute, the Greek side must stop creating difficulties and put sincere efforts into the process.

"Up until now, Northern Cyprus has proved itself as the side that wants permanent peace in the island, the Greek side should also adopt the same initiative, if this happens we believe that 2015 will be the year of peace for Cyprus." Erdoğan said.

Erdoğan underlined that Greece should also make the necessary contribution for the process and said that Turkey will continue to encourage the country in this regard.

Northern Cyprus President Akıncı also commented on the ongoing Cyprus issue, saying the parties on the island are "on the verge of a solution."

"The positive attitude of the international community is an extra support for us," Akıncı said.

Peace talks between the Greek Cypriot administration and the Turkish Cypriot government have been on hold since October.

Turkish Cypriots and Greek Cypriots have tried to find a comprehensive settlement to renew their partnership since the island's joint government collapsed in 1963.

The island has been divided into Turkish Cypriot government in the northern third and Greek Cypriot administration in the southern two-thirds after a 1974 military coup by Greece was followed by the intervention of Turkey as a guarantor power in Cyprus.

Peace talks were unilaterally suspended by the Greek Cypriot side last October after Turkey issued a navigational telex on behalf of the Turkish Republic of Northern Cyprus for seismic research off the coast of Cyprus.
Last Update: May 07, 2015 10:32 am
RELATED TOPICS