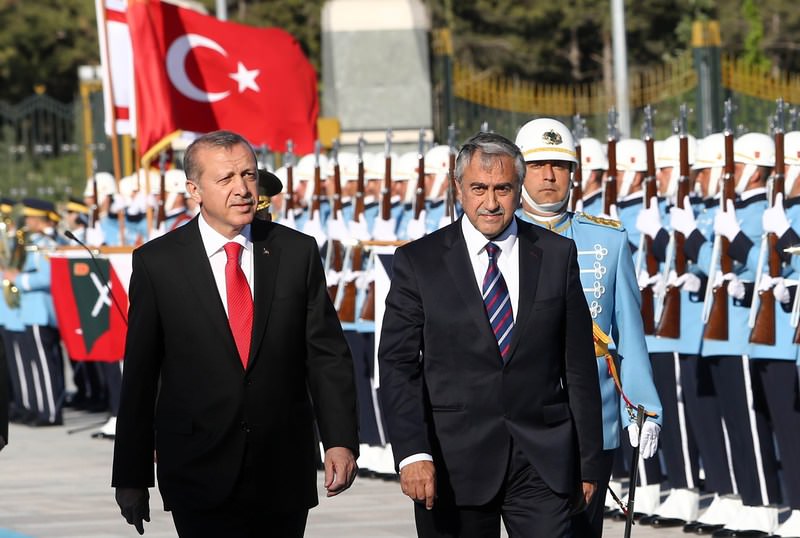 Newly-elected Turkish Cypriot President Mustafa Akıncı arrived in Ankara for talks with President Erdoğan and Prime Minister Davutoğlu, on the eve of U.N.-sponsored talks to unite the divided island

Prior to next week's reunification talks with Greek Cyprus on the divided island, newly- elected Turkish Cyprus President Mustafa Akıncı paid his first official visit to Turkish leaders in Ankara on Wednesday. Foreign Minister Mevlüt Çavuşoğlu and the deputy governor of Ankara, Mehmet Ali Ulutaş, greeted Akıncı at Esenboğa Airport. Akıncı later met with Prime Minister Ahmet Davutoğlu and President Recep Tayyip Erdoğan. U.N. Special Adviser for Cyprus Espen Barth Eide said both Greek and Turkish Cypriot leaders will decide on the exact date for stalled talks, aimed at reunifying the divided island, to resume after they hold their first meeting next week. Eide said Tuesday that Greek Cypriot President Nicos Anastasiades and Akıncı have told him they are ready to restart peace talks "without delay" and that there is "no time to waste." The date will be announced after the leaders meet Monday at a dinner hosted by Eide. Akıncı was sworn in last Thursday as the fourth president of Turkish Cyprus. "A self-sufficient Turkish Cyprus with the ability to govern itself will be able to find its place as a federal structure in international law and EU institutions," Akıncı said.

He added that such a development would benefit both Turkish Cypriots and Turkey.

After the inauguration, Akıncı met Deputy Prime Minister Bülent Arınç. They played down an earlier spat between Akıncı and President Recep Tayyip Erdoğan after the newly-elected leader said his government wanted "brotherly" ties with Ankara, rather than the traditional "motherland and child" relationship.

The remarks by newly elected president prompted a strong response from Erdoğan who told Akıncı that he "has to watch his words." Arınç said the motherland metaphor was meant to emphasize a relationship of love and sincerity. Arınç said: "We have only one concern: it is to achieve an economically strong Turkish Cyprus that stands on its feet with peace, happiness, stability and prosperity."

Since it was found, Turkey has called Turkish Cyprus its "child country," which is called "motherland" by Turkish Cypriots. The island is also called "mikri mas patridha" – "our small land" in Greek.

"Who fights for TRNC's recognition in the international arena?" Erdoğan asked, and continued by saying "I wonder if Mr. Akıncı would be able to struggle by himself. We paid a price in Cyprus. Also, the amount we spent for the continuing reconstruction of the island is around $1 billion. We never abandoned them."

Akıncı responded by saying he would work closely with the Turkish government and that he recognized that he had a responsibility to observe and enhance the ties between Ankara and Nicosia. Having won the runoff presidential election last Sunday with 60.38 percent of the vote, Akıncı replaced Derviş Eroğlu, who received 39.62 percent of the vote. Arınç, Undersecretary of the Foreign Ministry Feridun Sinirlioğlu, Turkish ambassador to Nicosia Halil Ibrahim Akça, as well as a number of ministers, deputies, military officials and civilians were present at the inauguration that took place at parliament.

The ongoing dispute on the island started in the 1960s when a Treaty of Guarantee was signed between Turkish and Greek Cypriots over the island along with the British government. The treaty stipulated that Cyprus would not participate in any political or economic union with other states, but three years later, Turkish Cypriots were ousted by force from all bodies of the new republic by Greek Cypriots. Later, Greek Cyprus claimed to be the representative of the island calling itself the Republic of Cyprus, which is solely not recognized by Turkey.
Last Update: May 06, 2015 8:52 pm
RELATED TOPICS