Deputy PM Kurtulmuş: Turks and Armenians were both Ottoman citizens 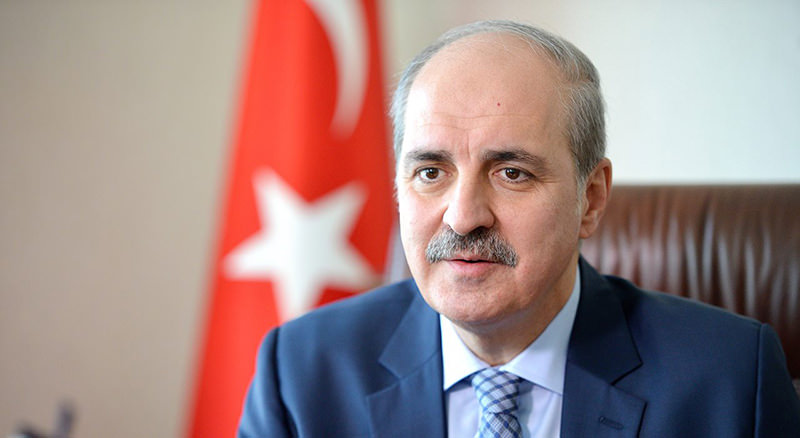 by Anadolu Agency May 08, 2015 12:00 am
Turkey will not let anyone exploit the 1915 events in Anatolia for political gain, Deputy Prime Minister Numan Kurtulmuş said on Friday.

"The Armenians and Muslims who were killed in those events were both Ottoman citizens who shared the same land and lived together for centuries as friends and neighbors.

"We will not let anybody exploit the great suffering of Anatolian peoples during World War I," Kurtulmuş told an international symposium on the 1915 events held under the auspices of the Turkish presidency in Ankara.

A relocation by the Ottomans of Armenians in eastern Anatolia following the revolts resulted in numerous casualties.

Turkey does not dispute that there were casualties on both sides, but rejects the definition of "genocide," calling instead for the establishment of a joint commission of historians and the opening of archives to study and uncover what happened between the Ottoman Empire and its Armenian citizens.

Kurtulmuş said that the issue was brought up by Armenian lobbies and used as a political tool against Turkey in an attempt to "corner" it, but they would not allow this to happen "because of a 100-year-old event, which constitutes some of the most painful pages of our history."

"Yes, great pain was suffered during that period when some groups tried to sow seeds of hatred and animosity in order to create dissension among the Muslims and Armenians who had been living together for centuries.

"It is also a proven historical fact that a group of Armenian gangs were incited by such groups to raid villages and mosques, killing their Muslim neighbors," Kurtulmuş said, adding that similarly, some factions within The Committee of Union and Progress-then-de facto leader of the Ottoman Empire-also resorted to "dirty ploys in order to instigate national, ethnic, religious and sectarian differences."

Kurtulmuş noted that there were also senior executives within the government which protested against such "wrongful acts," and cited the memoir of Konya Governor Celal Bey, who did not witness any Turks attacking Armenians, but instead saw Muslims helping Armenians, offering to accommodate them in their homes.

"Our historical documents are open for anyone who wants to uncover the facts, and we are ready for the search for the truth.

"However, if there is anyone who wants to trump up a political case against Turkey, and exploit the Armenian issue and the big suffering of that period for their own benefits, then their efforts are futile," he said.

He suggested instead that if the aim is to garner political gain, one would rather look into various other cases including "how the Africans were used as slaves and Native Americans were subjected to genocide on their own land."