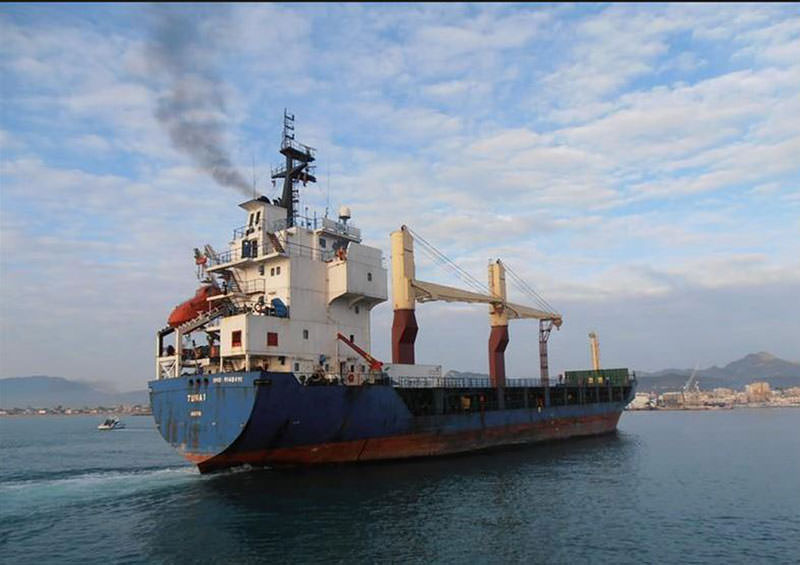 by Nurbanu Kızıl May 11, 2015 12:00 am
A Turkish cargo ship was hit by artillery fired off Libya's coast late on Sunday, the Ministry of Foreign Affairs said early on Monday. The attack was claimed by the Air Forces of Libya's internationally-recognized Tobruk government later in the day.

The ministry condemned the attack in a statement released on Monday, which resulted in the killing of the third officer of the ship, caused injuries to the staff and material damage to the ship.

It was conveyed that while the ship was trying to leave the area of artillery attack, it was the target of two additional subsequent air attacks. It was also reported that during the attacks, the third officer of the ship, a Turkish citizen, was killed. Some of the crew members were wounded and material damage occurred to the ship.

"We strongly denounce this heinous attack towards a civilian ship in international waters and we condemn those who carried out the attack," the ministry statement said.

It was stated that the ministry has protested to the Libyan authorities, and requested that the necessary action be taken in order to prevent such attacks in the future. "All actions threatening the security of this ship and other Turkish ships that may be sailing in the region should end immediately, and the necessary legal procedures against the authors of this attack should be carried out," the Foreign Ministry said. "We reserve all our rights, including compensation stemming from international law as part of the attack towards the ship in question. Necessary demarches are being taken regarding this issue before the related international organizations. "

The ministry also said that it is extremely important that those who commit such crimes are held responsible within the framework of the U.N. Charter and related UNSC Resolutions.

Libya's internationally-recognized Tobruk government stated that the air forces shelled the ship following warnings to stay out of the eastern city of Derna but that the ship allegedly failed to comply with the warnings.

"The ship violated Libyan territorial water despite warnings from the Libyan army," the commander of the Libyan air force affiliated with the Tobruk-based parliament, reportedly said.

"We first fired warning shots and when the ship did not heed we used live ammunition," he stated.

It was reported that the ship was towed to Tobruk terminal.