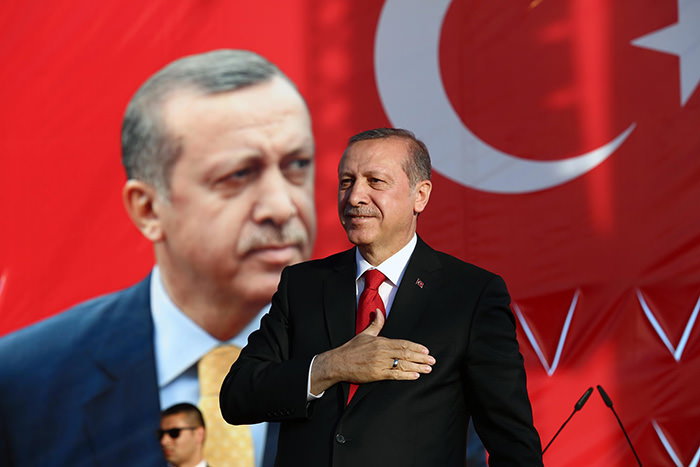 |DHA Photo
by Mehmet Solmaz May 14, 2015 12:00 am
Gülen Movement-affiliated prosecutor Celal Kara, who was dismissed from his job by the top judicial body on Tuesday, threatened Turkey's first directly elected president, Recep Tayyip Erdoğan, with sharing the fate of former Prime Minister Adnan Menderes, who governed the country between 1950 and 1960 and was hanged by the junta after the 1960 coup.

In an interview with Cumhuriyet daily, Kara not only labeled the elected government "a criminal organization," but also likened Erdoğan to Menderes when he attempted to demonize Erdoğan, who received the majority of the votes in the presidential election last August.

The Supreme Board of Judges and Prosecutors (HSYK) decided on Tuesday to dismiss Kara and three other prosecutors as well as a judge for misusing their profession. The bills of indictment, which were prepared by the 2nd Chamber of the HSYK, accuse Kara of abusing authority by requesting the court confiscate the assets of suspects without obtaining proper evidence and specifying that there was reasonable doubt about the suspects obtaining these assets through criminal means.

Kara is not the first Gülenist prosecutor to threaten Erdoğan. Previously, Prosecutor Zekeriya Öz threatened Erdoğan with death on his Twitter account without citing his name. "No one should desire dictatorship after the last century. His end will be like Saddam [Hussein] and [Moammar] Gadhafi. No matter who adopts lawlessness pays the price," Öz said posted on Twitter.

Long before the alleged Gülenist coup attempt through its members in the judiciary in 2013, the Gülen Movement's media outlets, Samanyolu TV, Zaman and Today's Zaman newspapers took a different stance in 2009 when late chairwoman of the Kemalist Support for Modern Life Association (ÇYDD), Türkan Saylan, threatened Erdoğan with Menderes's fate.

Earlier in December, the HSYK decided to suspend Gülen Movement-linked Prosecutors Muammer Akkaş, Kara and Öz. The report said Kara failed to provide the right of defense to those who were detained as part of the December 17 operation. It also mentions that the 3,419-page summary proceeding was not examined. The HSYK investigators' report stresses that Akkaş was responsible for numerous irregularities that led to the detention of many people. Suspects were detained while no evidence was found in 22 files for which Akkaş gave detention requests without examining the bags of sealed documents. He is accused of preparing a quickly written indictment before conducting an examination based on evidence. Other than wiretapped recordings, the authenticity of which has not been confirmed, Akkaş was not able to provide solid evidence. The report also says no documents or files were found on the transactions and contracts that were related to alleged corruption.
Last Update: May 14, 2015 5:59 pm
RELATED TOPICS