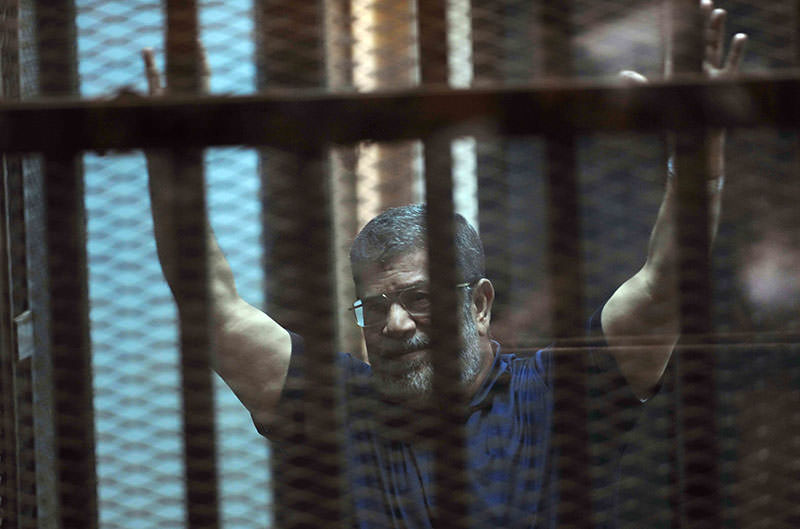 Death sentence for Egypt’s first democratically-elected President Morsi sparked an immediate response from the Turkish leadership, with President Erdoğan and Prime Minister Davutoğlu expressing their fury at the coup regime’s blatant disregard for justice and national will

An Egyptian court handed down the death penalty Saturday to the country's first elected leader, the ousted President Mohammed Morsi, prompting an immediate response from his close ally, President Recep Tayyip Erdoğan, who in hard-hitting words condemned the decision and branded the move as a roll-back to the "Old Egypt," which "lacked democracy." Erdoğan, shortly after the announcement of the court decision to sentence Morsi and more than 100 others from the Muslim Brotherhood to death, spoke against the ruling at an inauguration ceremony in Istanbul's Sultangazi district on Saturday.

During his speech he also struck a harsh tone against the Western community accusing it of keeping mum on the death sentences given to Morsi and the Muslim Brotherhood, which is currently outlawed in Egypt, while he defended their abolishment of the death penalty. "Unfortunately, Egypt has given a death sentence to a president who was elected with 52 percent of the votes. Egypt is turning back to the old Egypt," he said.

"The West, unfortunately, still has not revealed its stance against the coup leader el-Sissi. While Western countries have been abolishing the death penalty, they are watching the death sentences in Egypt in complete silence. They are not taking action," Erdoğan said in his speech.

In sharp words he continued, "Egypt's first democratically-elected President Mohammed Morsi sentenced to death? Why isn't the West taking a stand against the el-Sissi rule? They are just sitting back and watching the death sentence in Egypt."

Morsi was ousted by a military coup led by then Defense Minister, current President Abdel-Fattah el-Sissi following mass protests against his rule in 2013. Erdoğan has expressed support for Morsi and his Muslim brotherhood since they faced a brutal crackdown by the ousters, at the cost of souring relations with Egypt.

"This nation will be the one to set the tone. The Turkish nation will decide. That's why your stance on June 7 is very important," Erdoğan further said.

After deposing former President Hosni Mubarak, Morsi and the Muslim Brotherhood were found guilty of their role in a mass jailbreak in 2011, which ultimately brought Morsi to power. The court sentenced them to death in Saturday's hearing and referred its decision to the nation's top Muslim cleric for his non-binding opinion. The judge who handed down the decision has scheduled June 2 for the next hearing and the final decision will be delivered on that date. The decision will be open to appeal.Before the sentencing, Morsi and his co-defendants were already serving their sentence linked to the murder of demonstrators during clashes between his supporters and opponents outside eastern Cairo's Ittihadiya presidential palace in December 2012.

Erdoğan also issued a message in three languages via his Twitter account regarding the death sentence of the ousted Egyptian leader. Erdoğan's target in his message, which has been shared in Turkish, English and Arabic, was again international circles that he accused of not taking action against the decision.

"Every bullet fired on thousands of people in Egypt who pursue their political will is also directed to the legitimate politics across the world. I call out to the European Union and [world powers], what happened to the ban on the death penalty? Why don't you move [against it], Why are you quiet?" Erdoğan's Twitter message reads.

Prime Minister Ahmet Davutoğlu also spoke against the court's decision, drawing parallels to the 1960 military coup that resulted in the execution of then Prime Minister Adnan Menderes. Menderes was put on trial following the coup and was executed along with two ministers Hasan Polatkan and Fatin Rüştü Zorlu.

Addressing an election rally in the western Bursa province, the prime minister said, "A disdainful, painful period that Turkey experienced 55 years ago is now being repeated in Egypt."

Davutoğlu also vowed that no president or prime minister would ever again be executed in Turkey.

"No president or prime minister will be sent to the gallows again in this country," Davutoğlu said.

Mass sentences were delivered to not only Morsi and his Muslim Brotherhood but also the pro-democracy activists during the 2011 uprising, which erupted out of a call for the resignation of Hosni Mubarak who was implicated in corruption. Mubarak faced charges ranging from blighting the economy of the nation to ordering his forces to kill demonstrators. All were dismissed in November 2014. A retrial was ordered for Mubarak on corruption charges as a result of which he was sentenced to three years in prison and was forced to pay huge amounts in fines.

The courts, which were relatively more lenient on Mubarak and officials during his term, are delivering harsh punishments to Morsi and the Muslim brotherhood, which is considered a sign of the biased judicial system in the country, many believe.

Turkey's Ministry of Foreign Affairs has also condemned the court decision to impose the death penalty on Morsi in a strong statement released on Sunday.

"We regretfully condemn the death penalty decision on President Mohammed Morsi, who was popularly elected as president but ousted through a coup along with a hundred other people," the statement said.

The ministry, branding the decision as "another black stain" on Egypt since the coup, added, "It is obvious that the decision will not contribute to a permanent peace and sustainable stability that Egypt needs urgently."