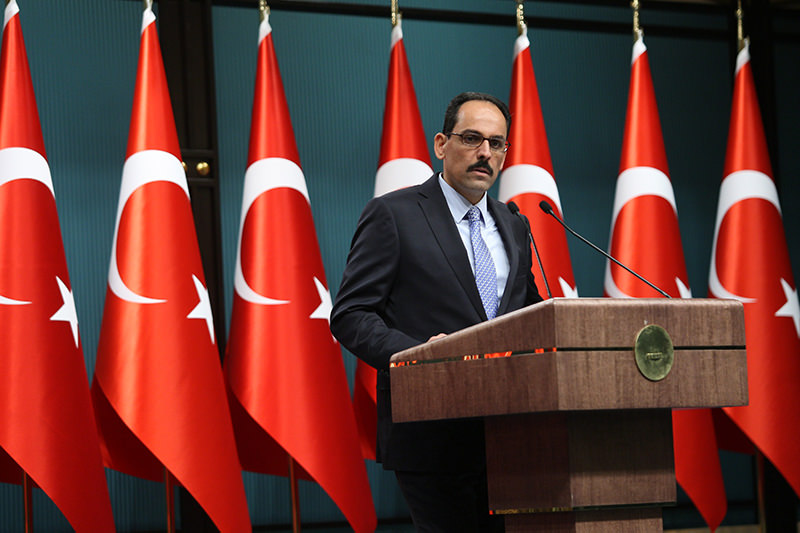 by Daily Sabah May 18, 2015 12:00 am
Turkey's presidential spokesman İbrahim Kalın harshly criticized the the death sentence given to 106 people including former president Muhammed Morsi in Egypt and said that it could have serious repercussions for the Middle East.

Kalın spoke at a news conference at the Presidential Palace in Ankara and emphasized that Turkey would cooperate with the U.N. Human Rights Commission following the sentences to take the necessary steps.

"The death sentence given to Morsi and others in Egypt is nothing but the death of justice in the country" Kalın said, adding that the violation of human rights since the ousting of the first democratically elected President Muhammed Morsi has reached critical levels.

He added that remaining silent and neutral regarding the death sentence are also dangerous as they "entail the silence of the mind and the conscience." Kalın stated that it is meaningless for those who remain silent to coups and death sentences to speak about democracy, human rights and popular representation.

The presidential spokesman once again emphasized Turkey's firm stance regarding the matter and invited the global community to raise their voice in this respect. "We condemn regretfully the weak statements made by Western democracies regarding the coup and death sentences in Egypt" Kalın said, adding that such decisions are unacceptable as they endanger the notion of democracy.

In response to a question about if Turkey is taking any initiatives in the international arena regarding the death sentences, Kalın said that the country was discussing the matter with Gulf countries including Qatar and Saudi Arabia.

"This issue does not only concern Turkey, Egypt or a few countries in the region, but rather has a global connotation" said Kalın, adding that the death sentences and their execution would push the Middle East into chaos, and not just Egypt alone.

The presidential spokesman also condemned the attacks made against pro-Kurdish Peoples' Democratic Party (HDP) offices in Southern Mersin and Adana provinces on Monday. He noted that the attack against a single political party equals to an attack on all political parties in the country. "Such provocative actions are simply unacceptable" Kalın said, and added that all measures have been taken by the Ministry of the Interior and the security forces to investigate the matter.

Kalın also said that it is unacceptable for some HDP officials to blame President Erdoğan and the government for the attacks as both sides have taken all necessary measures and consistently make warnings to ensure that all citizens safely participate in the elections.