PKK threatens locals in southeast Turkey, urges them to vote for HDP 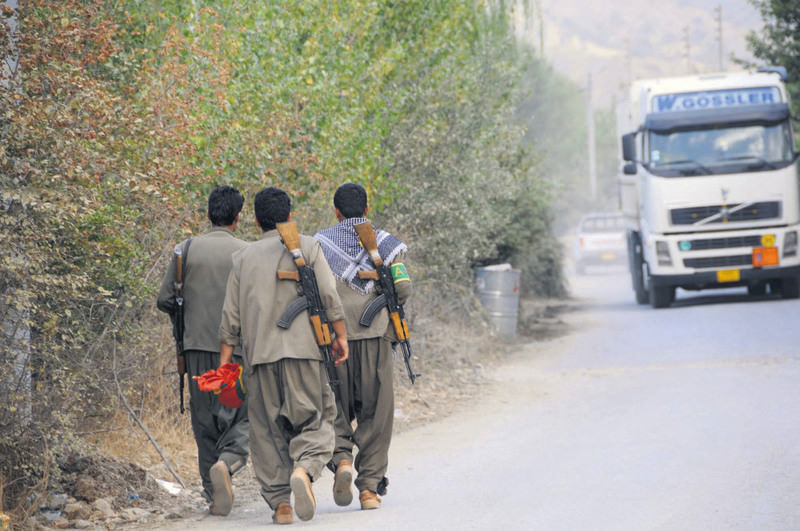 While ignoring its leader's call to disarm, the PKK is reportedly sending letters to homes in predominantly Kurdish populated regions in southeast Turkey, threatening people to cast their votes for the pro-Kurdish HDP, which regularly sends delegations to meet senior PKK members in northern Iraq

In an apparent bid to intimidate people in eastern provinces, where most of Turkey's Kurdish population lives, the PKK sent letters to locals threatening them not to vote for the Justice and Development Party (AK Party) in the upcoming June 7 general elections.

"If anyone in your family votes for the AK Party or other parties, you will face the harsh consequences of it," the letters read, bearing the signature of the PKK. The threatening letters are sent to those who meet with or host AK Party officials at their homes.

"We just can't understand it, how could you take their side when the AK Party has been so bad. Either you don't grasp it or you are being paid. If what we hear is true, we'll spoil the pleasure," the letter further reads.

The PKK has intensified its pressure on locals in eastern provinces to vote for the Peoples' Democratic Party (HDP), which is vying to pass the 10 percent election threshold to make it into Parliament. The pro-Kurdish party, which acts as a mediator in the reconciliation process with the government, pursues to end the decades long conflict with the PKK and the state, and has been frequently accused by government officials of triggering violence by exerting its influence on PKK sympathizers. The government cites the Oct. 6-7 Kobani protests that erupted out of a demand for more support from the government for Kurds fighting to defend Kobani against the Islamic State of Iraq and al-Sham (ISIS). HDP Co-Chair Selahattin Demirtaş had called on supporters to take to the streets, which ended in violence. Demirtaş is now touting democratic pursuits of his party to expand its reach.

The General Staff announced on Wednesday that a soldier and a civilian had been kidnapped by the PKK in the eastern province of Muş. On Tuesday the militants burned down vehicles to block the construction of a road in Bingöl. On Wednesday, the AK Party headquarters in another eastern province, Mardin, was hit by a blast bomb. The PKK is thought to be behind the assault.

The PKK, which was expected to announce its disarmament before the June elections as its imprisoned leader Abdullah Öcalan ordered in his annual Nevruz message, have not put down its arms, leading to a setback in the reconciliation process while it was about to reach a conclusion. Let alone leaving behind arms, the PKK keeps igniting aggression in eastern provinces as Demirtaş's democratic rhetoric continues to appeal to voters in western Turkey as well.

Turkey thought a new page was opened in the name of democracy when Öcalan announced in his Nevruz message that the PKK will resume its cause via democratic means and should leave behind that period of time when they resorted to arms to make true their purposes. He called for a congress to convene to discuss dropping arms before the elections, which did not, and apparently will not happen in the near future.

"There are still illegal structures such as the courts of the PKK in the east. They have to eliminate them as an indication of sincerity," Orhan Miroğlu, a prominent figure in Kurdish politics said. He also emphasized that violence will manifest itself in a variety of ways if the PKK continues."Pressuring one to vote for a certain party or sentencing someone in illegal courts can also be considered as violence and should be ended," Miroğlu said.
Last Update: May 21, 2015 11:36 am
RELATED TOPICS