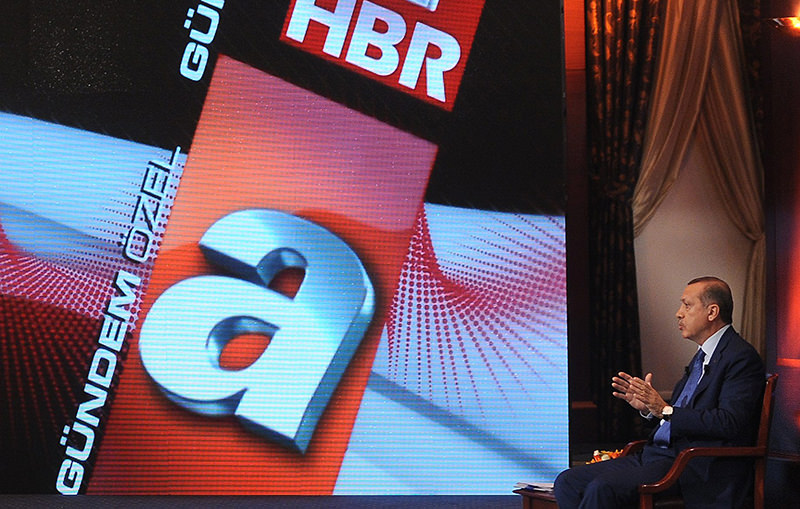 by Daily Sabah with AA May 22, 2015 12:00 am
President Recep Tayyip Erdoğan stated that the United States fosters the Gülen Movement through its schools which operate in the country.

In an interview broadcast live on the private ATV& A Haber television networks late Thursday night, Erdoğan stated that the Gülen Movement operates over 160 charter schools in the U.S. which receive state funding.

"Through these schools, the U.S. supports the Gülen Movement" said Erdoğan, who added that US support given to charter schools strengthens the movement.

With regards to how Turkey was dealing with the Gülen Movement and its network of schools, Erdoğan said that the U.S.-based Fethullah Gülen, had "ran away" to the U.S. in 1999, who then established between 160 and 170 schools on U.S. soil.

The president said that the so-called Gülen Movement was earning huge sums of money through these networks of schools.

"The key point in [winning the] battle with them was the prep schools," Erdoğan said. "They earned around a billion Turkish liras [around $386 million] from such prep schools. We have shut them down and it was handled," he added.

"When I was competing for the presidency, I suggested that the party-member system should be brought together with a [new] constitution. This will make Turkey stronger," he said.

Erdoğan gave examples of Russia, France and the U.S., where, he said, such a system worked well and rejected suggestions that democracy would suffer if presidents were political party-members.

"The problem in Turkey is rooted in this party-member, no-party-membership issue," he said. "The countries which have party based member presidents can decide quickly on implementations and punishments," he added.

"Being a president does not abolish being a politician," he said, adding: "We have a political approach. I have an equal distance to every party."

The Turkish president also noted that during the 2011 elections, the ruling Justice and Development (AK Party) bagged around 50 percent votes, while the presidential elections that he won saw the support of around 52 percent votes.

"This difference shows that I got votes from some other parties as well," he said.

This is not the first time Erdoğan has sought support for replacing the current parliamentary form of democracy with a new presidential system; he has made the same call in many of his recent speeches across Turkey and abroad.

When asked whether he was being "too tough" in his public speeches, Erdoğan said: "My people get me in these speeches...This is Tayyip Erdoğan's way of talk."

About the "reconciliation process" with the outlawed PKK that is aimed at finding an end to the banned organization's 40-year terrorist campaign against Turkey, Erdoğan said: "We are obliged to provide security of life and goods [to all] in this country. We will do whatever it needs to be done [to achieve that], no matter what. Our army and security forces will not give any credit to be in turmoil like this."

Erdoğan also drew parallels between the PKK with the pro-Kurdish Peoples' Democracy Party, or the HDP. "If there are no sanctions [on HDP] right now, [then it must be understood that] it is for the sake of the reconciliation process," he said.

The president also revealed that some privileges had been granted to the jailed PKK leader Abdullah Öcalan. He said that Öcalan had been given companionship of convicts "because he was lonely" in the İmrali Island, where he was being held.

"[Such measures] were all messages to our Kurdish people," Erdoğan said. "To erase all the lies and to show them what is actually being done for the reconciliation process," he added.

The "reconciliation process" began in 2013 aims to end the decades-old conflict with the PKK, which has claimed the lives of more than 40,000 people in Turkey.

About Turkey's relations with the regional Iraqi government in Irbil and the central government in Baghdad, Erdoğan said that if Iraq decided in the future to split up with its federal structure then "it is their problem".

He said that at the moment relations between Turkey and Northern Iraq were progressing well. "[However,] the Baghdad government and Northern Iraq administration are not getting along well because they [Irbil] cannot even get their constitutional rights."

Relations between the central government in Baghdad and the Kurdish regional government in Irbil have seen many ups and downs. The bone of contention is Irbil's demand for full payment of oil taken out from fields under its control.