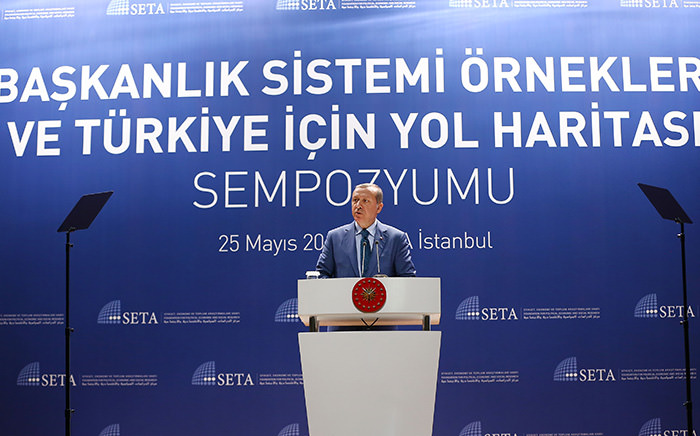 Replacing the current parliamentary system with a presidential form of government for a more politically stable and smoother-running country has taken the center stage in the upcoming parliamentary elections, with the principle advocate of the transition, the ruling Justice and Development Party (AK Party), facing off against the rest of the political spectrum. President Recep Tayyip Erdoğan, speaking yesterday at the Ankara-based Foundation for Political, Economic and Social Research (SETA) think tank's panel, "Country Examples on presidential system and basic dynamics of the presidential system for Turkey," once again reiterated the importance of the transition. Erdoğan, who became the first directly elected president in Turkey last August, claimed the current parliamentary system has become an impediment to Turkey's further economic and social development. The AK Party has based its election campaign on replacing the Constitution, which was introduced in 1982 by the military junta, and on introducing a presidential system.

Italy recently approved a new electoral system that bans coalition governments, something that has been blamed for the country's tiresome economic crisis and political instability, a problem also reflected in Ankara. Italy has included a new regulation in its electoral system, titled "Italicum," bringing to an end the era of coalition governments. From now on, 40 percent of the total vote will be enough for a party to come to power as a majority.

Alluding to the recent elections in the U.K. that led to the resignation of three opposition leaders who suffered crushing election defeats in the U.K.'s general election in early May, Erdoğan also criticized Turkish leaders who refuse to step down despite failure in elections.

"None of them comes up and says, 'If I lose in the elections, I quit.' Prime Minister [Ahmet Davutoğlu] can say it, why can't you?" he asked addressing opposition parties' leaders.

The entire world of Turkish politics has been caught up in the debate about whether the country needs a presidential system to replace the current parliamentary government, a move strongly backed by the AK Party government and Erdoğan. However, there has been strong opposition to the issue since Erdoğan brought it up. Erdoğan, in his speech at the panel, explained the basis of the reactions against the move: "Their opposition is not in principal, but personal."

Erdoğan also argued against the idea that a possible presidential system in Turkey might turn the government into a dictatorship. He said: "A president who accounts to the nation can not turn out to be a dictator."

However, at the moment, the AK Party does not have enough seats in Parliament to vote for a constitutional change, such as the introduction of a presidential system, without opposition.

Turkey will hold parliamentary elections on June 7. It is expected that all the details of a presidential system will be brought to the table after the June 7 general elections.

A constitutional amendment, or a new constitution would be needed to set up a presidential system. The country's current Constitution was drafted two years after a military takeover in 1980 and numerous amendments have been made to it since.

The governmental system has been a hotly debated issue throughout modern Turkey's history beginning with the eighth president, Turgut Özal, and continuing with the ninth president, Süleyman Demirel. Erdoğan has brought it up once again, claiming that a presidential system is more suitable to the country's political structure.