Turkey to continue to provide assistance for Gaza reconstruction 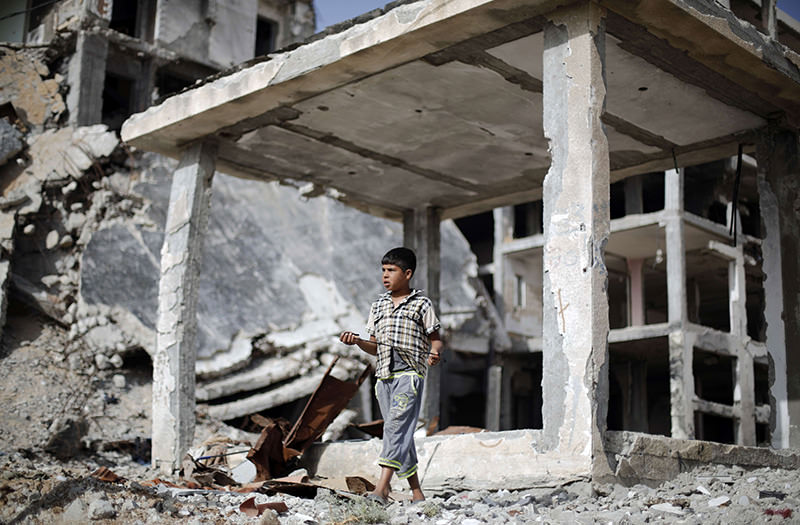 A Palestinian boy walks on May 27 2015 in front of buildings that were destroyed during the 50-day war in the summer of 2014, in the Gaza Strip town of Beit Hanun (AFP Photo)
by Daily Sabah with AA May 27, 2015 12:00 am
Foreign Ministry spokesman Tanju Bilgiç has underlined that Turkey continues to provide humanitarian and development assistance to the besieged Gaza Strip and Palestine.

Bilgiç said that on Wednesday that the assistance given to Palestine reached $369 million in the past decade. "The total assistance provided to Palestine in 2014 was $76.3 million," he said, explaining that $59.2 million dollars of this was official aid while the remaining $17.1 million was civilian aid.

"With the aim to overcome the devastating destruction caused by the last Israeli attacks on Gaza, Turkey has pledged to give $200 million of aid for the reconstruction of Gaza between 2015 and 2017," Bilgiç said.

The Prime Ministry Office of Public Diplomacy also said on Monday that Turkey is continuing to provide aid to Gaza for reconstruction after Israel's devastating military offensive last summer.

The Israeli offensive left over 2,160 Palestinians dead, mostly civilians. The 51-day campaign also resulted in the death of 73 Israelis, mostly soldiers.
Turkey had promised to provide $200 million during from 2015 to 2017 to support the reconstruction of Gaza and the sustainable development of Palestine.

Turkey also said the aid will be carried out on a project basis, step by step.

"If the Turkish Republic makes a promise, that promise will be fulfilled," Serdar Çam, head of the Turkish Cooperation and Coordination Agency (TİKA), told Anadolu Agency. "Our statesmen's promise does not hang in the air."

The projects are formed as development-focused and in line with the requirements of Palestinians, according to Turkish diplomatic sources. Projects in health, education, water, wastewater, emergency fuel support and food will be prioritized.

Çam said that Turkey's many institutions, nongovernmental organizations and local governments are working hard to help Gaza, but the blockade and permission are slowing the process.

He also criticized recent media claims based on a World Bank report issued Thursday that said Turkey only fulfilled part of its promises to the people of Gaza so far.

"Some known circles create misinformation about Turkey, although they know the facts and our efforts in Gaza," he said. "The people who unjustly criticize Turkey, however, cannot display the will and courage to criticize Israel, which vandalizes Gaza."
The World Bank published an alarming report on the Gaza Strip's economic situation.

The report said even more alarming was the situation of youth unemployment, noting that the joblessness rate soared to more than 60 percent by the end of 2014.

"Nearly 80 percent of Gaza's population receives some kind of social assistance and nearly 40 percent of them still fall below the poverty line," the bank said. "Recovery is conditional upon easing of the blockade to allow reconstruction materials to enter in sufficient quantities and to lift exports out, as well as donor financing for reconstruction."

Gaza has been under an all-out Israeli blockade since 2007, a measure that has deprived the coastal territory's approximately 1.9 million residents of the most basic of needs.
Last Update: May 27, 2015 4:30 pm
RELATED TOPICS