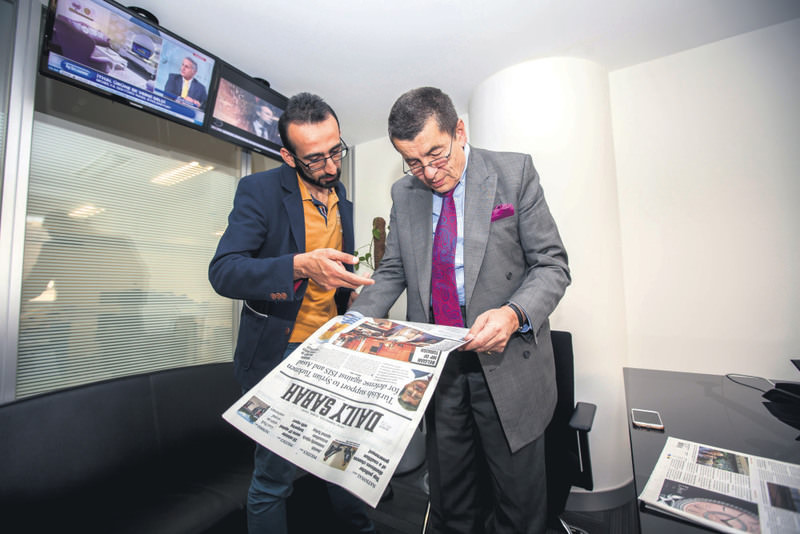 by Mehmet Solmaz Jun 01, 2015 12:00 am
British barrister Sir Geoffrey Nice, who is among the team of legal experts representing victims of the Mavi Marmara raid in which nine Turkish activists were killed by Israeli commandos, arrived in Turkey and attended the commemoration ceremony of the raid's fifth anniversary in Istanbul with the participation of some 100,000 people.

Speaking to Daily Sabah on Monday, Nice said both Turkey and its people show a "firm stance" on the Mavi Marmara case. Turkey has three conditions for reconciliation with Israel – an official apology, compensation for the victims' families and lifting the blockade on the Gaza Strip. Israel has yet to fulfill the last two conditions for the normalization of ties.

Commenting on the International Criminal Court (ICC) prosecutor's decision to review its previous ruling in which it deemed the crime's gravity inadequate, Nice said "many components of the decision" were surprising. Giving an example from the ruling, he said: "Such as her [the prosecutor's] finding that the Israel Defense Forces [IDF] were only concerned with stopping the vessel rather than doing anything to passengers. That's a pretty surprising part of her overall decision, and one of the number of parts of her decision we would like her to reconsider."

When asked about Israel and pro-Israeli circles' pressure on the international community and the ICC, Nice stressed that despite political pressure, prosecutors cannot resist individual applications from reaching their offices for an investigation to be launched.

When demanding a review of the ICC's decision in January, Nice and other legal experts representing Mavi Marmara victims penned a statement saying that "the interests of justice and fairness, which are the core of the ICC's mandate, strongly militate in favor of the Prosecutor reconsidering her decision."

The killing of 10 people on the Mavi Marmara ship was commemorated in several ceremonies across the country on Sunday. A photography exhibition was held in the central Anatolian town of Kayseri in honor of Furkan Doğan, an American-Turkish dual citizen who died in the raid at the age of 19.

Thousands of volunteers from across the country came to Istanbul to attend the demonstration held by the Foundation for Human Rights and Freedoms and Humanitarian Relief (İHH), which had organized the humanitarian convoy led by the Mavi Marmara in 2010. The group traveling from Konya stopped in Ankara early on Sunday and held prayers in front of the Israeli Embassy.

Ten activists were killed on board the Mavi Marmara in May 2010 when Israeli commandos attacked the ship as it sought to break Israel's blockade of Gaza that had been in place since 2007.