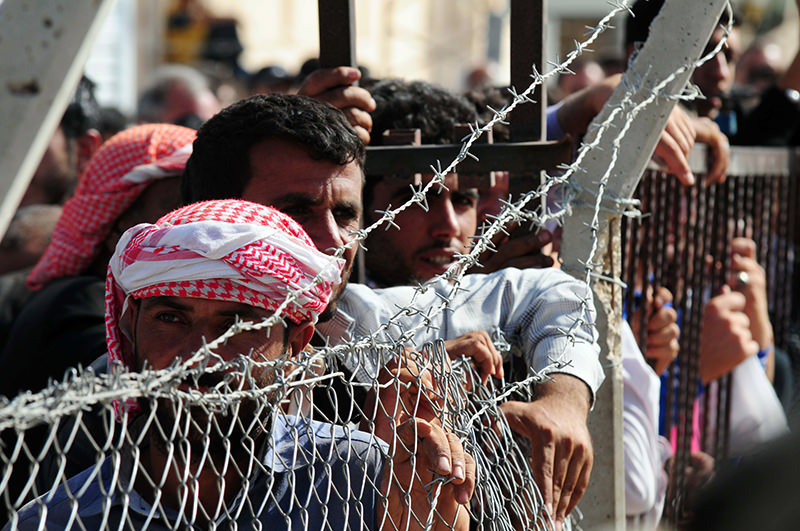 by Anadolu Agency Jun 01, 2015 12:00 am
The governor of the Turkish district bordering Kobani has described Turkey as the "single lifeline" supporting the devastated Syrian Kurdish town.

Suruç governor Abdullah Çiftçi said that Turkey had delivered over 1,600 trucks of humanitarian aid to Kobani, which is trying to recover from a punishing months-long battle between the self-proclaimed Islamic State of Iraq and al-Sham (ISIS) and Kurdish forces.

"Before the onset of the clashes, we sent 815 truckloads of humanitarian aid to Kobani. The total amount of aid delivered since then has reached 1,602 truckloads," Çiftçi told the Anadolu Agency on Monday.

Fighting for control of Kobani started in September 2014 when ISIS captured the town, leading to fierce clashes between the terrorist group and Kurdish fighters.

The extremist rebels were pushed back in mid-January when Kurdish forces regained control, marking a major defeat for ISIS terrorists.

However, the four-month clashes left the Kurdish town in ruins and in dire need of comprehensive rebuilding as well as humanitarian aid.

Çiftçi said that Turkey had helped treat wounded Kurdish citizens along the Mürşitpınar border gate, including transferring some to Turkish hospitals for further treatment.

"Turkey has been a great host to Syrian refugees as well. And we are also helping Syrian citizens who want to go back to Kobani to return safely," he said, adding that Turkey has been Kobani's "single lifeline" during the conflict.

"If Kobani is still holding out today, the biggest reason is Turkey's presence," he added.

Çiftçi was also quick to note that Turkey played a critical role in the victory against ISIS as "we were the transfer point of both peshmerga and Free Syrian Army fighters to Kobani."

Hundreds of peshmerga fighters passed through Turkey on their way to Kobani to fight ISIS militants in northern Syria.

After ISIS launched its offensive to capture Kobani -- located only hundreds of meters away from the southern Turkish border -- a group of 150 Iraqi Kurdish peshmerga arrived in Turkey's southeastern province of Şanlıurfa on Oct. 28, 2014.

A second peshmerga battalion reached the battle after traveling through Turkey on Dec. 3, 2014.

A third group arrived in Kobani on Jan. 16, 2015, from the capital of the Iraqi Kurdish regional administration, Irbil, via Suruç.

The fourth and last group of Kurdish peshmerga fighters left Kobani on April 28 after their two-month mission ended.