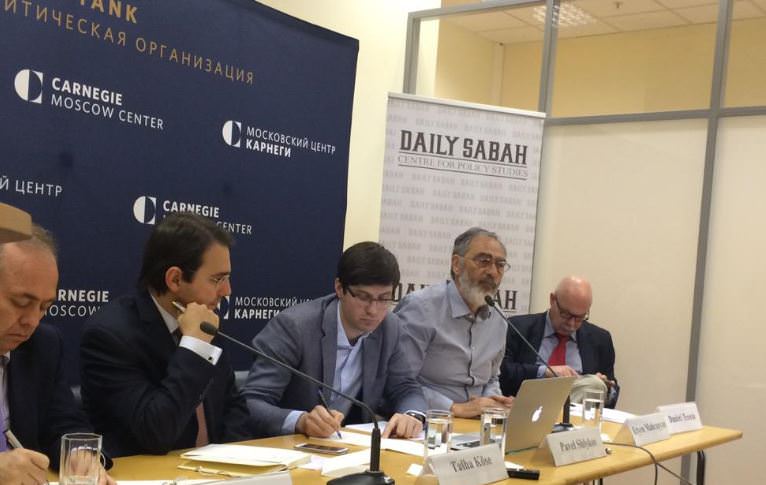 by Özge Bulur Jun 03, 2015 12:00 am
As part of a series of conferences organized by the Daily Sabah Centre for Policy Studies to cover numerous discussions, a panel was held jointly in Moscow with the Carnegie Moscow Center on June 3 regarding Turkey's upcoming June 7 elections and vision of a "New Turkey."

In the first session of the interactive panel, Etyen Mahçupyan, a former senior adviser to Prime Minister Ahmet Davutoğlu, mentioned possible election scenarios, the dynamics of the electorate in the country, positive and negative sentiments of the pre-voting atmosphere and the public's criteria for casting their votes next Sunday. Associate professor at the Institute of Asian and African Studies at Moscow State University, Pavel Shlykov, briefly talked about the Justice and Development Party's (AK Party) popularity as well as opposition parties' probable stance after the AK Party's predicted victory following the June 7 elections. The third speaker of the first session, Birol Akgün, the director of the Institute of Strategic Thinking (SDE), touched on the theoretical background of voting and summarized sociological, socio-psychological and economic voting models. Akgün also reviewed elections in Turkey in the eyes of the right and left blocs in addition to central and peripheral structures.

In the second session Daily Sabah columnist Sadık Ünay summarized the types of growth in the Turkish economy both in theoretical and practical terms. Saying that a change of dynamics depends on the link between the economy and politics, Ünay added that on the eve of elections "there is no sudden decline in the budget deficit" unlike the probable setting depictions in general. Ünay also briefly explained the current account deficit, inflation and unemployment rates in Turkey as a country on the rise in terms of a democratic market economy along with its challenges. Natalia Ulchenko, a professor at the Institute of Oriental Studies at the Russian Academy of Sciences, raised questions on how Turkey could solve the structural problems of its current economy apart from responses mainly given by the AK Party concerning growth in business and the economy in the last decade.

As for the last session, Al Jazeera Türk News Director Gürkan Zengin described Turkish foreign policy trajectory over the past decade. While talking about the principles of Turkey's international policies, Zengin emphasized that "Turkey has never sustained its international relations on a sectarian basis" regarding Turkey's stance specifically on Middle Eastern policies. Another speaker in the last session, Victor Rayevsky, who is a senior fellow at the Russian Academy of Sciences' Institute of World Economy and International Relations, highlighted some misunderstandings of Turkish foreign policy like neo-Ottomanism. Chaired by Daily Sabah Columnist Kılıç Buğra Kanat, the last session ended up with some remarks on Turkey's future plans for the Turkish Stream and its meaning to Russia.

While making concluding remarks, the director of the Daily Sabah Centre for Policy Studies, Pınar Kandemir, emphasized that the "New Turkey vision is an opportunity for the new government to replace the Constitution made by the military junta," and added: "In terms of the reconciliation process, Turkey is somewhere that is impossible to track back from." The director of the Carnegie Moscow Center, Dmitri Trenin, underlined that Turkey bears much importance not only to Russia, but also for all other countries around the globe, apart from its regional significance.