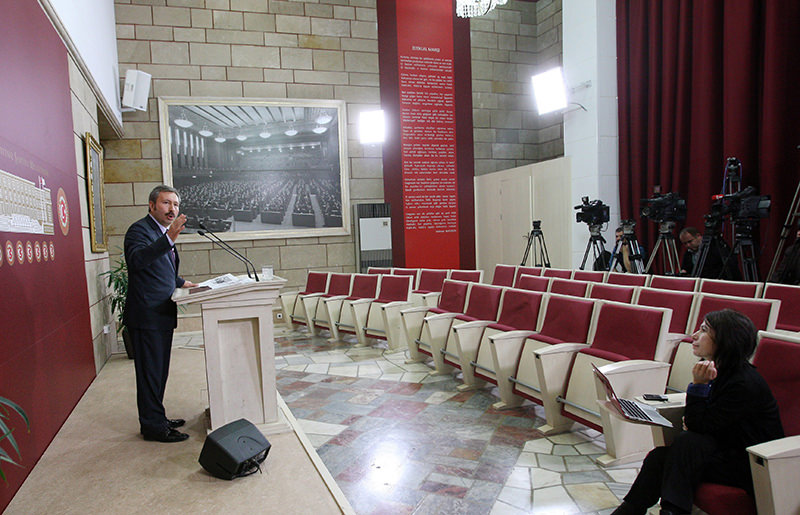 u0130dris Bal was mocked on social media for addressing an empty press conference at the Turkish Parliament
by Nurbanu Kızıl Jun 04, 2015 12:00 am
Turkish deputy İdris Bal, who is allegedly affiliated with the Gülen Movement has reproached his supporters on Wednesday for abandoning him and failing to keep their promise, which he claimed was the main reason behind his resignation from the Democratic Development Party (DGP), in which he served as the chairman between November and March, following his resignation from the AK Party.

Outlining the details behind his resignation from the DGP through his Twitter account, Bal harshly criticized those who initially expressed their support for him, but left him all by himself as he was struggling to gather support for the DGP.

"I am being accused of leaving active politics and the party I have established," Bal said on his Twitter account, who also noted that the main reason for him to establish the party was because people from all walks of life had initially pledged to support him .

"I fulfilled my duty and established the party," the lonesome deputy said, adding that those who initially promised to support him preferred to break their promise and to sit and watch, rather than actively supporting him.

Bal stated that those who pledged to give their support did not even respond to his phone calls, and some even went on and became candidates from the AK Party. He also claimed that some of his supporters joined his party solely because they assumed it had financial support of some sort and thought they could exploit it for their interests.

"The lack of morals, and the breaking of promises I witnessed dampened my spirits and seriously brought my motivation down," Bal expostulated and added that all of these factors have reduced his party to a name.

Bal further noted that he was embarrassed by those who promised to support the party but chose to back down, and by those within the party administration who failed to fulfill their pledge.

"What am I fighting for? I give up," Bal had previously said when he resigned on March 31 from DGP, only after four months he established the party.

Bal's abandoned party, had already been showing signs of failure, especially after the resignation of one of its founding members, Fevzi Bubilik, who said: "The party is far from a democratic environment." Additionally, during the Gülen-linked party's first Turkish Grand National Assembly (TBMM) press conference Bal addressed the empty seats, which became a mockery in social media.

Contemporary Turkish political history is filled with examples of failed political movements that were formed by deputies who resigned from main parties. For instance, in 1997 a group of deputies who resigned from the center-right True Path Party (DYP) set up the Democratic Turkey Party (DTP). The chairman of the party was Hüsamettin Cindoruk, who was a former chairman of the DYP, and in the 1999 elections they received less than one percent of the votes. In later years they tried to survive with different chairmen and names and in 2008, the party decided to merge with another party.

Center-left political circles have also experienced similar failures. In 2002, former Foreign Minister İsmail Cem resigned from the Democratic Left Party (DSP) ahead of parliamentary elections and formed the New Turkey Party (YTP), however after failure in the elections they closed the party and merged with the main opposition Republican People's Party (CHP).

The Gülen Movement is a transnational movement led by the U.S.-based Fethullah Gülen. It is accused of wiretapping thousands of people including government officials and encrypted phones. It has over 140 private schools around the world including in the U.S., Europe, Asia and Africa. It has been accused of infiltrating state institutions in Turkey and trying to overthrow the government. Government officials have continuously expressed their determination to continue to lawfully fight the Gülen Movement, whose followers are accused of infiltrating state institutions to gain control of state mechanisms and illegal wiretapping, forgery of official documents and spying