by Daily Sabah Jun 05, 2015 12:00 am
The articles published on New York Times, and several other western media outlets such as the Guardian, and the Economist, aiming to characterize Turkish President Recep Tayyip Erdoğan as an intimidator while Turkey's general elections approach, have been questioned by Turkish media and politicians.


The newspaper, which is known for its interferences with political developments in other countries, published an article on Thursday that is designed to influence public opinion with a distorted depiction of President Erdoğan. 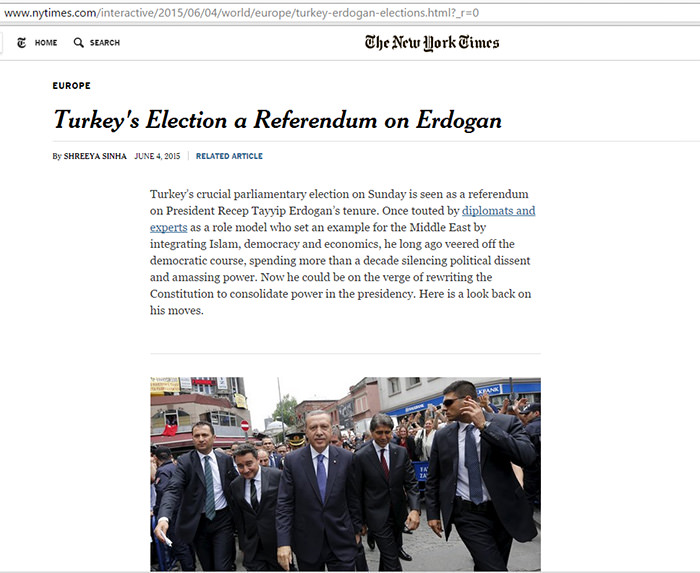 However, after the NYT's efforts to mobilize public opinion have been intensified as the Sunday's parliamentary election approaches, Turkish voters have started to question the newspaper's credibility in covering Turkish politics and reasons behind the attempt to demonize Erdoğan.

NYT allegedly cooperates with the political rivals of the Justice and Development Party (AK Party) to promote the perspectives of the opposition by using its popularity to create an illusion that there is growing domestic and international criticism against Erdoğan, for being an autocratic figure. However, the country's past that has gone through several military coups, compared to its growing relationship with democracy depicts a different picture of AK Party's achievements during the past 12 years.

While the editorial board of the NYT published an article entitled "Dark Clouds Over Turkey," on May 22 in an attempt to depict Turkey's current mood as dark and fearful, the similar approach appeared frequently on the pages of the NYT even during World War I.

The last ruler of Ottoman Empire and an important figure of WWI, Sultan Abdulhamid II was also subjected to the NYT's biased publication policy. 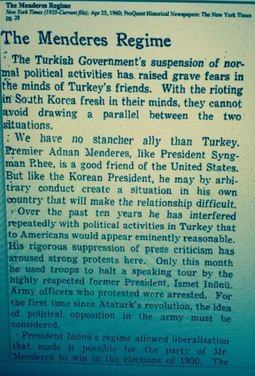 Right after the 1980 military coup, another Turkish leader was elected by millions of supporters. After his period as the prime minister, he was selected by the parliament as president. The New York Times was there again, ignoring the people's respect and support to their democratically elected leader Turgut Özal.

This time, the paper used a different language, unknown to the ethics of journalism: 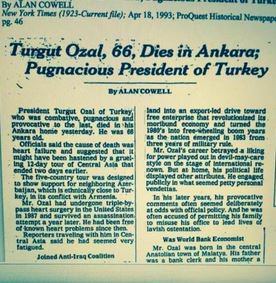 As the general elections approach, Turkey's political parties have intensified their campaigns to reach more people. The ruling AK Party has been in rule for 12 years and for the first time the party is joining the elections with a leader other than Erdoğan. Former Foreign Affairs Minister Ahmet Davutoğlu was elected by the party as the new chairman and succeeded Erdoğan, who became Turkey's first elected president.

Considered as the "key party" by many, the pro-Kurdish Peoples' Democratic Party (HDP) has been trying hard to pass the election threshold, which is 10 percent. However, the party's inconsistent rhetoric with regards to reconciliation process has raised concerns and questions in voters' mind.

Other major opposition parties, such as the Republican People's Party (CHP) and Nationalist Movement Party (MHP) have also conducted campaigns in regions where they have the most support. CHP has been the most active in the Aegean and Mediterrenean regions, while most of MHP rallies took place in the central Anatolian region.