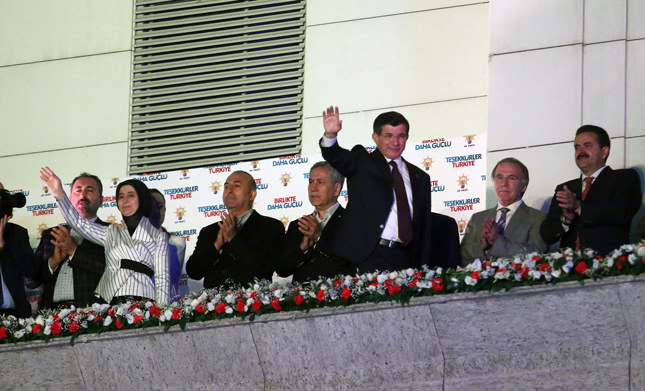 by Daily Sabah with AA Jun 08, 2015 12:00 am
Turkish PM Ahmet Davutoğlu said during the ceremonial balcony speech in the nation's capital that the election outcome has again shown that the AK Party is 'backbone' of the nation, adding that every measure will be taken to prevent damage to Turkey's stability after the results.

The party, which came to power in 2002 before winning elections in 2007 and 2011, secured 41.18 percent of the vote after all the ballots counted, giving the party 256 seats in the Grand National Assembly - 20 short of a simple majority.

The pro-Kurdish Peoples' Democratic Party (HDP) passed the 10 percent threshold with 13.19 percent of the vote to take 79 seats - the first time it will enter parliament as a party.

President Recep Tayyip Erdogan is expected to ask the AK Party, as the party that received the highest number of votes, to form a coalition government within 45 days. The government will then submit its program to the assembly within a week, where it will be subject to a vote of confidence.

If parliament does not support the new government, the president can call for a fresh election.

More than 53.7 million Turks were eligible to vote in polls to elect 550 deputies to the Grand National Assembly on Sunday.

Since 2002, the AK Party has won four general and three local elections, as well as two referenda. Erdogan, one of the party's founders and former prime minister, won the presidential election in August last year.

The party has overseen an economic boost that almost tripled national income, introduced social reform and initiated the "solution process to seek an end to the Kurdish conflict while weathering criticism over corruption claims in the upper reaches of the party.