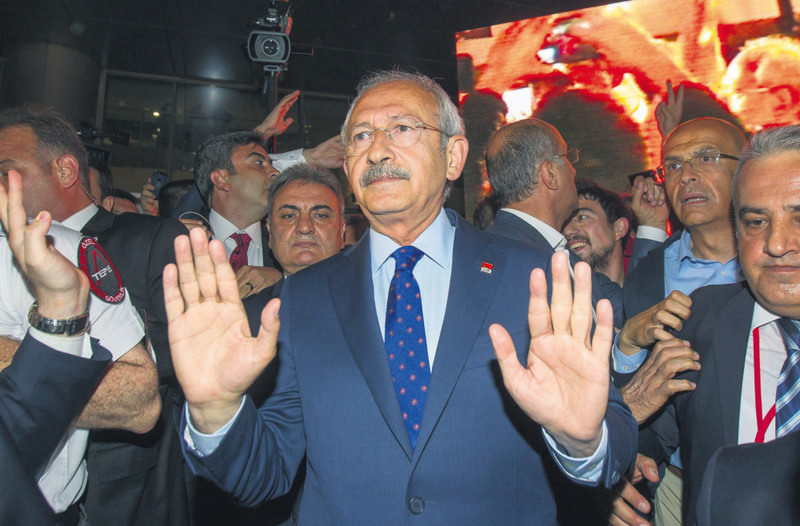 The Republican People's Party's (CHP) failure to increase its share of the votes in the parliamentary elections has once again created consternation within the party, with most blaming Chairman Kemal Kılıçdaroğlu, who said he was against early elections.

The main opposition Republican People's Party (CHP) is expected to convene in the forthcoming months. Yalova deputy Muharrem İnce is again seen as a dissident with the potential to run for chairmanship against current leader Kemal Kılıçdaroğlu after the failure in Sunday's parliamentary elections.

Following the party's defeat with Ekmeleddin İhsanoğlu, its joint presidential candidate with the Nationalist Movement Party (MHP), in the 2014 presidential elections, İnce had resigned from his position as CHP group deputy chairman and announced that he would run as a candidate against Kılıçdaroğlu to become the new party leader. In the extraordinary congress, which was held in September 2014, he ran for the CHP chairmanship and lost to Kılıçdaroğlu. Yet, the debates between him and Kılıçdaroğlu continued for a while. Reportedly, 300 CHP delegates signed for İnce to be a candidate for chairman at the congress, however 78 out of 81 CHP provincial chairmen have declared support for the current party chairman in a joint statement to the press.

Before last year's extraordinary congress, he gave nine reasons why Kılıçdaroğlu has largely failed to become a successful leader of the main opposition. İnce listed his reasons by saying that Kılıçdaroğlu does not believe in consensus and accused him of not taking CHP members' ideas seriously.

Asserting that Kılıçdaroğlu is far from being scientific, İnce said the CHP leader does not know how to conduct perception management, nor does he conduct public opinion polls. Echoing his previous sentiments, he claimed that Kılıçdaroğlu likes the right-wing while keeping a distance from leftists. "He is far from assertive and is always ready to be the runner up," İnce added.

İnce also said Kılıçdaroğlu is distant from the public and does not understand their demands and expectations, adding: "He does not think about leaving his post at all and has become a politician obsessed with his position."

İnce was not the only party member who was critical about Kılıçdaroğlu's administration skills. A dissident group led by former Ankara Deputy Emine Ülker Tarhan called on Kılıçdaroğlu to resign after the CHP's failure in the presidential election. Furthermore, Kılıçdaroğlu received harsh criticism from İnce and many other deputies who have strong leftist roots. The intra-party conflict escalated and is forcing CHP executives to settle on an extraordinary party congress. Conflict among party members continued a few days ahead of the extraordinary party congress.

Kılıçdaroğlu responded to the criticism targeting his administration saying, "I will not let discrete voices speak against the party's solidarity. I will bring discipline to the party. If you discipline the party, you also assure confidence among society," and added, "Intra-party criticism does not mean criticizing your party via organizing press conferences. I will not allow these actions if I am re-elected." Kılıçdaroğlu also blamed dissident members who opposed his leadership and described the group of people of having "sick mindsets" a few days after the election loss.

Although Kılıçdaroğlu pledged to resign if the CHP received less than 26 percent of the vote in the parliamentary elections, as soon as the election results were announced and the CHP's 25 percent was revealed, Kılıçdaroğlu made a statement in which he said: "I am content with the results. There is no situation to leave the post. I will not resign."
Last Update: Jun 09, 2015 10:30 pm
RELATED TOPICS